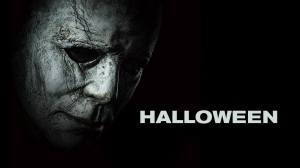 Halloween, co-written and directed by David Gordon Green, had me completely hooked. I sat there in my seat giddy at what I was seeing; a good Halloween film that was paying homage to the original in a way that I loved, while also standing on its own as something new and exciting. But then a significant shift in the film’s tone occurred during its middle portion; all that was good disappeared, and the film shifted into a place that DIDN’T work and had me feeling severely deflated. But then it brought it back for an ending that maybe won me back. I’m really eager to dive into this new Halloween film; explore where it goes very right and also very wrong and see if this is a film that I can recommend, because I’m genuinely still not sure. I’m very conflicted on how I feel about this one, but that’s because I so wanted it to be good. Anyway, let’s bring this rambling introduction to an end and get on with the damn review.

40-years after he terrorised Haddonfield, Iowa and, Laurie Strode – played by Jamie Lee Curtis – Michael Myers – played by James Jude Courtney and Nick Castle – escapes from the hospital that held him all those years and seeks to once again kill anyone he sets his sights on. However, what Michael Myers is not ready for is the preparations that Laurie has been putting in place during that time. Their final showdown is fast approaching and only one can walk away alive.

If you indulge me for a moment, I have to touch upon the importance of John Carpenter to me as a film lover and the fact that it all started with Halloween. It was the first film of his I ever saw and I was immediately hooked, so as you can imagine, my eagerness for this new one to be good was pretty high. The style to Carpenter’s work, the simplicity of Halloween, that score! It was a concoction of elements that came together to have me completely hooked and eager to explore more of his films. To this day, The Thing still stands as my favourite film of all time. But the issue that continually seems to be the case when it comes to Carpenter’s films is when others try to do a sequel or remake, it’s almost always bad. There always lesser films. They lack the charm or creativity of Carpenter, and of course the mesmerising soundtrack.

Just look at the history of the Halloween franchise. There are many more bad films than there are good, and Carpenter’s very clearly still stands as the best. So, walking into this new Halloween film, I was cautiously excited – I’ve been burned one too many times.

My journey with this new Halloween film was a bumpy one – with me absolutely loving certain moments and then totally disliking others. The first act of this film is superb. It was such a strong start that I was sitting there in my chair convinced I was finally watching a worthy Halloween sequel. To say I was happy would be an understatement. I sat there with a grin on my face for much of the beginning of this film.

Halloween does such a brilliant job of bringing you back into the world of Laurie Strode and Michael Myers. It lays everything out so well; you understand where everyone is after the significant amount of time that has passed, and you’re quickly reintegrated into the lives of the primary characters. But it’s doesn’t only do a great job of laying everything out, it also does a great job of expanding what we know and developing things – characters primarily – in ways that is both respectful and interesting.

The life of Laurie Strode after the fateful night she was terrorised by Michael Myers is one full of sadness and hardship. To see how significant the impact of that night was on her is what makes her inevitable showdown with Michael so effective. That young girl who always did her homework, never broke the rules and seemed assured to be on track for a successful career in what ever she desired, has been reduced to a paranoid (which is fair), over protective alcoholic who has pushed everyone of importance in her life away. It’s sad to see Laurie where she has ended up, but in the context of the story it makes for a very compelling character to follow.

And rather than rooting for Laurie to survive this time, I was rooting for Laurie to get her revenge, and I fully believed she was capable of achieving it. Jamie Lee Curtis embodies the powerful Strode and watching her effortlessly wield a shotgun was thrilling to see – especially when Michael was about. It’s one of the aspects of the film I loved so much: that there was a clear effort to build upon the story of Laurie Strode and it was also a plus that it was handled really well.

The first act of this film is the type of sequel I feel I’ve been waiting a long time for. There was a clear level of respect and understanding for the original, and a clear effort to try to embody what made the first film so great. And so, it’s a shame that respect and understanding didn’t carry on through the rest of the film, following the first act.

All of the brilliance and work of the first act was unfortunately undermined by what came next. The slow build up towards Michael regaining his mask. The establishing of the characters, the laying out of the story; all the brilliantly handled elements were then trampled over and lessened by a middle portion that did a lot to damage, and in my opinion harmed much of the goodwill this film had earned up until that point. When it ticks over to Halloween night (in the film) and Myers is loose on the streets killing indiscriminately, the film seemed to lose its identity, its tone, its quality. It started off so well, with some satisfying Myers kills, but it soon took a dive into a very different type of tone that in no way worked with what the film had already established.

The middle of the film begins to feel like an improv comedy film and less a thriller with scares. It feels like a completely different film. Like Halloween had finished and a comedy film started. The dialogue feels different in tone, it had a more humorous edge to it. The characters didn’t feel like others we’d seen before, they were like characters out of a teen comedy. And all of the development and exploration of the main characters disappeared.

It’s here in the middle of the film that all that was good about the film goes away. Laurie Strode turns into a shouting madwoman; the character devolves and no longer offers anything that was once interesting. Also, the unnatural tone does a lot to harm the effectiveness of the scares and the kills. The intensity is taken out of film during the time when Myers should have been at his most scary. Side characters become irritating and the plot begins to introduce elements that just feel farcical. All of the fear, all of the tension deflated and disappeared from the film. It’s a horror film that feels as if it was neutered in its prime and left with nothing to effectively work with. Everything that the first act had done had been overrun and lessened by a middle portion that had my head slumping into my hands and wishing the greatness of the beginning would come back.

There was a moment in the beginning of Halloween where I thought I might be touting this as my favourite film of the year. That I was finally watching a Halloween film that would have me leaving the cinema feeling fulfilled and excited by what I had seen, but the middle of the film saw to that no longer being the case.

But it wasn’t all a loss. The film’s finale did a lot to win me back. After the disappointment of the middle portion of the film, Halloween returns to what it originally was; an atmospheric, character driven film with a respect for the original and a satisfying handling of the fearful Myer’s moments. Bringing it all back to Michael in a house with Laurie, but this time it’s Laurie who’s doing the hunting and not Michael was such a thrill to watch. There were so many great little touches during this finale. My giddiness returned. As the slow, tension filled finale played out and I wasn’t sure as to how it would conclude, I sat there again with a grin on my face as I was once again watching something that felt so right. I genuinely at some points wanted to punch the air with happiness. There’s a particular moment at the very end (no spoilers) that was so well done it almost had me willing to forgive the film for its unfortunate indiscretions.

When I think back on Halloween and my mixed journey with it, I’m left feeling very conflicted. There was a lot to this film that I absolutely loved; that left me grinning, and so satisfied at the handling of them. But there was a significant portion of this film that really lessened my experience with the film; that had me feeling like I have before when watching one of the many Halloween sequels. I can’t stop thinking about the film, but what I keep thinking about is how close the film came to being the sequel I’ve always wanted.

But I suppose there is one thing I’m fully sure on and it has to be the point that I end on: John Carpenter’s wonderfully composed score. The music in the film is used to such great effect, and the new compositions by Carpenter really compliment the film well. It’s one I’ll definitely be listening to a lot.

I suppose when I look at this Halloween film and my level of closeness to it, I realise that while the film didn’t give me everything I was hoping for – but it did come damn close; closer than any other one – that this film will still undoubtedly satisfy those looking for a solid horror film.

I will recommend, Halloween. While hardcore fans might not be that enamoured with it, I’m confident a general audience will be more than satisfied with their time with the film. So depending on what side you fall on, this will either be a film you really enjoy or a film where you’re left not feeling as fulfilled as you’d hoped.

So, what did you think of Halloween, and subsequently, my review of it? Let me know in the comments section down below please. Like what you read? Then please consider following both/either my blog and/or my Twitter – @GavinsRamblings. As always, I want to end by offering you my sincere thanks. That you took the time to read my silly little review means so much to me. Thank you and have a fantastic day!