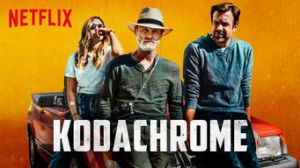 Kodachrome, directed by Mark Raso, never feels like it reaches its full potential but still manages to deliver a touching little film. This film struggles to fully develop its stories and never feels like it earns particular moments, but thanks to a great cast, who are offered some well-developed characters; there is still something quite lovely about this film. So, let’s make our way into the review and see if this is one of those indie Netflix films worth settling down and enjoying for the night.

Matt Ryder – played by Jason Sudeikis – hasn’t seen his father, Ben – played by Ed Harris – in nearly a decade. But after Ben’s nurse, Zoe Kern – played by Elizabeth Olsen – visits and tells him he has very little time left to live. Matt reluctantly agrees to join them both on a road trip to Kansas where Ben will be able to develop some of the most important pictures he took as a photographer, on a type of film that soon won’t ever be able to be developed again. It won’t be an easy journey for anyone, but it is a necessary one for them all in ways they don’t yet know.

At the core of Kodachrome are three central characters who all have their particular little failings that make them people worth following – even if some of them don’t make it easy in the beginning. Matt (Jason Sudeikis) is a product of how his father treated him. If you were to meet him in real life and then describe him, you’d probably say: ‘He’s a dick’. It is not easy to want to follow Matt and his story in the beginning because of this. But you know he’s going to go on a journey that will result in him changing and becoming a better person. And it’s the particular journey he goes on (the road trip with his dad) that I found myself wanting to stick with him – and I’m glad I did.

Alongside him you have his dad, Ben (Ed Harris) and his nurse, Zoe (Elizabeth Olsen) and the sweet dynamic between the two of them and the small similarities in their personalities – mainly that they don’t take crap from anyone – made them a duo that I found myself happy to attach myself to. I only wish we had gotten to see a little more of them and their dynamic. In fact, there was a lot that I wished I had gotten to see just a little bit more of – but that’s perhaps just me bring greedy.

It’s just that, each of these characters are introduced and established in ways that make them feel really well-developed from the off. I felt I knew them well and wasn’t ever struggling to understand who they were as people. And the first time they all sat around the dinner table and failed to have a pleasant evening; I knew I was in for a bumpy, but fun ride; as they tore into one another in ways that only family and close friends know how too.

But just as it feels like the film has found a good rhythm and has primed itself for some joyously self-indulgent character interactions – it shifts away to storylines that end up hindering one another and inevitably cannibalising themselves.

Matt and Zoe’s developing relationship and the broken relationship between Matt and Ben (that they’re slowly fixing in their own dysfunctional way) are storylines that feel like they began to move in opposite directions. When the focus would be on one, the other would disappear and be left to linger. I feel that making the two storylines intersect more than they did, and them help to support and evolve one another; could have resulted in a more complete feeling experience. Neither feel whole in their approach and parts of them do suffer.

In particular: the relationship between Matt and Zoe. They go from arguing and not really having any sort of connection that would suggest there’s more between them, to all of a sudden acting as if they’re falling for one another hard. It was often a relationship full of moments that didn’t feel earned – that it was happening because the writer felt it should happen. Only the scene where the two get drunk at a bar and connect like two people who have properly shared time together, did I ever find myself invested in their story. Don’t get me wrong, there were still moments to it that I liked but it was never a part of the film that I felt fully blossomed into what it could have been. I think it’s thanks in large part to Elizabeth Olsen and Jason Sudeikis, who do a lot of leg work, that it ever worked for me at all.

It was the very troubled relationship between Mark and his father that I was really invested in – even if it was a predictable at times. The two of them are vicious. They tear into the other (and anyone who might get in the middle of their verbal mauling’s) in ways that both make you unintentionally laugh and recoil in shock. But when they begin to move beyond that and begin to find a bond in all the anger; there’s of course real beauty in it. And I have to hand it to Ed Harris and Jason Sudeikis who gel brilliantly with one another. Their broken but sincere bond fully came across on-screen, because the two actors found a chemistry with one another that was touching and honest.

There is a decent little film in Kodachrome. Like I said in the beginning: it never quite reaches its potential – but that didn’t stop it from being a heartfelt, meaningful experience (in its own little ways). I was never bored watching this film. I cared about the people I was watching, and I cared about seeing their journey through to the end.

So, while it may seem like I didn’t enjoy this film; I want to stress that I did. Its problems are clear to see, but those problems never felt like they brought the film down – there was never a point where I touched upon the mousepad to see how much I had left to sit through – I was engaged throughout my time with Kodachrome. When the credits rolled, I was mildly disappointed (because the film didn’t achieve all that it seemed to set out to do) but I was still pretty happy with the experience I had been a part of.

I’m fine enough with recommending, Kodachrome. This isn’t a film begging to be seen. But it is one that I found to be… comfortable. You can put it on one night when you’re looking for something relaxing and harmless and you can just effortlessly enjoy it. It won’t stay with you, but it also won’t leave you feeling unfulfilled. If you do take the time to check it out, I hope you have as pleasant a time as I did.

What are your thoughts on Kodachrome? What did you think of my review of it? Sound off in the comments down below letting me know what’s bouncing around inside your noggin. Also, I’d really appreciate it if you would consider following my blog and my Twitter – @GavinsRamblings – as it will help to build them both into something hopefully greater. I’ll stop bothering you with my ramblings now and finish by saying thank you to you for taking the time to read my review. Have a pleasant day!