Ben Is Back, written and directed by Peter Hedges, has at its core a meaningful and powerfully explored set of central characters. Much of the first half of this film brilliantly follows a group of characters who are written and acted in a way that has them feeling authentic and raw in who they are. I found myself completely sucked in by their dysfunctional family, that from the outside seems to be coping but from the inside is barely holding on. I only wish the film had continued with it throughout, rather than straying off into a primarily plot driven experience where the meaning and the emotion seemed to take a back seat. So, let’s explore all that this film has to offer and see if its latter half does an amount of damage that makes it not worth watching. Onto the review. END_OF_DOCUMENT_TOKEN_TO_BE_REPLACED

Boy Erased, written for the screen and directed by Joel Edgerton, is a challenging and emotionally turbulent story that had me totally attentive from the beginning and throughout. There are some structural issues and some pacing issues that make Boy Erased not seem as effective as it could have been, but those were issues for me because I was so invested in the film and simply wanted more of it. So, let’s see if the issues that effect the film do an amount of harm that causes it to be a film you should pass on, or if there’s still something potent enough to warrant you making the trip to the cinema to see it. END_OF_DOCUMENT_TOKEN_TO_BE_REPLACED 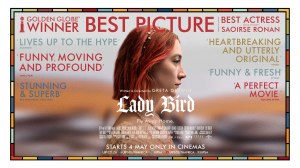 Lady Bird, written and directed by Greta Gerwig, is wonderful and moving in its simplicity. There’s something so real and so magnetic about this film. It’s eclectic and charming selection of characters pull you in; it’s simple, yet engaging little story charms you, and everything has an air of purity to it that makes it utterly enjoyable. It offered a host of emotions to dance between and it left me with a smile on my face by the end. This is a review I’m going to enjoy writing, because there’s nothing better than getting to gush about a film that sidles its way into your heart. So, let’s get to it. END_OF_DOCUMENT_TOKEN_TO_BE_REPLACED

Three Billboards Outside Ebbing, Missouri, written and directed by Martin McDonagh, almost feels as if it’s towering over you, like a monument to the unfiltered failings of humanity – a monument that demands that you pay it the attention it deserves. You’ll find yourself happily willing to do this, because of how impressively balanced the film is; being both unforgivingly honest and also genuinely funny. Also because of its characters, who challenge you (on a multitude of levels), the performances that astound you, and multiple plot strands that have you hooked from the beginning and throughout. The film is one that you want to engage with, but also slightly fear. The levels of quality on show in this turbulent, challenging film, make it one I’m excited to write about, so come along as I review it, won’t you? END_OF_DOCUMENT_TOKEN_TO_BE_REPLACED

In my opinion, this is the best selection of films nominated for ‘Best Picture’ in quite a few years. That’s not to say that the previous years have been lacking, as there have been some outstanding films nominated. It’s just that this year is near enough a clean sweep in terms of the overall deservingness and quality, when all the films are considered.

But let’s stop waffling on about the quality of the overall list, and actually talk about each film individually – giving them the time and the praise they deserve. I’ll be ranking these films from my least favourite one to the one that I thought was the best. But if I’m being honest, only 1 of the films on this list is out-of-place when compared to the rest – anyway, on with the list. END_OF_DOCUMENT_TOKEN_TO_BE_REPLACED

Manchester by the Sea, written and directed by Kenneth Lonergan, captures brilliantly the true struggle of life, while also highlighting its more awkward, unintentionally funny side. This film took be on an incredible (get ready for a lot of hyperbolic words in this review) emotional journey; from laughter/giggles, to concerned empathy and all the way to the point where I was struggling to hold back tears. I was – more than once – overwhelmed by the completely human story that, Manchester by the Sea focused on, and my adoration for it is boundless, as you’ll see in this review. So let’s get to it, and explore all the achievements of this film. END_OF_DOCUMENT_TOKEN_TO_BE_REPLACED