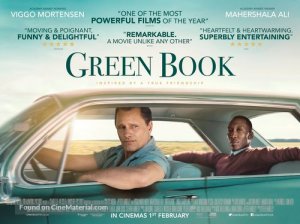 Green Book, directed by Peter Farrelly, is exactly what I thought it would be; a safe, comfortable, crowd pleasing film that fails to meaningfully explore the lofty themes at its disposal. It relies on jokes and plot points that go nowhere and ultimately tries to wrap everything in a neat, comfortable bow that has you leaving the cinema without a worry or a care. Green Book is in no way a bad film; I found it quite enjoyable and I was fully endeared to the relationship between the film’s two lead characters… but I was just hoping for so much more. This will be an interesting and challenging review to work through, but I’m looking forward to doing it. So, let’s make our way into the review and see just how Green Book shapes up.

Green Book somewhat tells the true story of an unlikely friendship between Dr. Don Shirley – played by Mahershala Ali – and Tony Lip – played by Viggo Mortensen – where the two embarked on a tour through the deep south, with Tony driving and protecting Shirley during this tour. The two come from very different backgrounds and lead vastly different lives, but in their troubled journey, a charming friendship forms that will have you smiling.

Here’s the thing about Green Book: it’s a pleasantly entertaining film that garners quite a few laughs, a number of smiles and every so often sprinkles in an attempt to approach its themes and highlight the injustices that not only Dr. Shirley experienced, but every black American. But unfortunately, Green Book focuses more on attaining the laughs and the smiles and less on its themes and mostly offers nothing of substance. And when it does make an attempt to try and saying something more meaningful, it does it with the finesse and subtlety of a sledgehammer to the back of the head.

Instead of diving deep into the many important and extremely challenging topics at its disposal, Green Book is a film that plays it entirely safe. Never did I feel I was being pulled into an experience that had me uncomfortable or disgusted with what I was seeing done, because the film always found a comfortable way to resolve the situation. The conflict would either always result in a satisfying conclusion that took away any worry or it would wrap it up with a little joke that would eliminate all of the tension and leave you feeling like good won out overall.

I mean, if you look at Dr. Shirley – something the film often fails to do – and you consider the fact that he was a black, gay man living in the 60’s, who feels incredibly lonely and attempts to run from that loneliness through his addiction to alcohol, and not see a person rich in compelling, meaningful stories that would resonate to this very day and be deserving of the focus of cinema, then I don’t know what could be a better focus for your film? But instead of ever touching upon those hardships in a way that resulted in something being said or the eyes of the audience being opened to the struggles of such an oppressed individual, we instead spend time joking about fried chicken or setting up potential plot points (like the troubled relationship between Dr. Shirley and his brother) only for it to go absolutely nowhere and serve only to distract from what was really important.

What Green Book is, is exactly what institutions like the Academy or the Hollywood Foreign Press or critics want these days. A film that approaches the subject of race and discrimination but doesn’t do so in a way that it risky or upsetting to come to terms with. It does it in a way that leaves everyone feeling good about the situation and themselves. It’s the ‘Driving Miss Daisy’ of the modern age.

Rather than leaving you reeling from an experience that was tough but worthwhile, Green Book instead wraps everything up in a tidy little bow. It ties off any potential loose ends with scenes that leave you feeling emotionally fulfilled and not needing to worry about anything of importance. For a film with the potential to explore and excavate some truly meaningful hardships, its disappointing just how empty Green Book ultimately feels.

Don’t get me wrong, the charming dynamic between the film’s two central characters is certainly endearing. I enjoyed watching the bond between the two of them form and I enjoyed the friendship that came from their bickering. I also have to praise the fantastic work by both actors; Mortensen in particular, who is an actor who I never seen do a similar performance once. He’s an actor who fully commits his everything to a role and it’s continually inspiring to see.

But for me, that friendship… the chemistry between both the actors and the characters wasn’t enough to make Green Book the type of experience it deserved to be. Yes, I was entertained, but I was never completely engaged. When you add to that all the subsequent truths and revelations about the real lives of both men and how they died despising one another; it does all add up to a film that I don’t think achieves what it set out to do.

However… I’m conflicted when it comes to my recommendation. This is a perfectly enjoyable film that a general audience will enjoy and come out of feeling uplifted by, and because of that, I feel I should recommend it. The film isn’t bad, it will appeal to plenty of people. But I just feel that the film should have been more and should have challenged its audience to experience something more significant. I suppose in the end it comes down to your personal preference. If you’re looking for something easy and enjoyable to watch, then give Green Book a chance. But if you’re looking for a film that has something to say and says it well, I’d recommend looking elsewhere.

Let me know what you thought of Green Book and my review of it in the comments section down below. Like what you read, well not only can you be kept up-to-date on my ramblings by following my on Twitter – @GavinsRamblings – but you can now here them on my newly launched podcast, ‘The Meandering Movie Podcast’, which you can find on iTunes (https://apple.co/2FUkAhU ) and Soundcloud (https://bit.ly/2S4sMm6 ) and you’ll find all the updates you need on Twitter – @MeanderingPod. Thank you so much for stopping by and I hope to see you return!