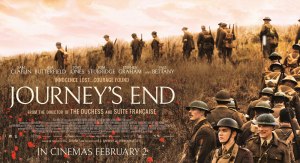 Journey’s End, directed by Saul Dibb, is an incredibly intense and incredibly poignant film that from its opening scene had me completely gripped by its story and its characters. The exploration and handling of the characters in this film is extremely moving. You become a part of a story that will see you brought down into a place that you can’t imagine being in. You explore characters who are irrevocably broken. And if you’re like me, you will be infinitely moved by it. I’m eager to move on from this introduction and get to the main review, so let’s get to it.

Set in Aisne, France, in 1918, we follow Second Lieutenant Raleigh – played by Asa Butterfield – as he eagerly looks to join the platoon in which his old school friend, Captain Stanhope – played by Sam Claflin – is the commanding officer. However, when he arrives in the trenches he finds a man he no longer recognises. Captain Stanhope over his three years in the war has been hugely affected by the responsibilities put upon him and has turned to alcohol to help ease his demons. And that’s not all: Looming only a few days away is a suspected assault by the Germans that will most likely result in the slaughter of most, if not all, of the men, due to the conditions of the trenches that Captain Stanhope and his men have been left to defend. The battles both in the trenches and in the minds of some of the men rage throughout this film.

It is in the broken psyches of the men in the trenches that we find a film that fully and unflinchingly explores the effect war has on a person. The souls of the characters are well and truly broken – broken to a point that they are perhaps irreparable. That’s no easy place to willingly step into and then watch a film with such content, but it is in how honest the exploration by the film is, that giving over a little piece of you is something worth doing. The piece I handed over was my emotional fortitude. On a number of occasions this film broke me – and for me that was something I was more than willing to allow happen, because the result was a film that moved me and left a mark on me that I respectfully carry.

It is the juxtaposition between two of our main characters that we get our best glimpse into the what war does to a man. Second Lieutenant Raleigh (Asa Butterfield) is a plucky young man. There is a spring in his step; he’s excited at the prospect of getting to fight the Germans who are only a short, but deadly, walk from him. Even his beaming big smile standouts in the tiered, glum surroundings of the trenches. Of course though, we all know that the big smile and the excitement to be in the thick of war will disappear and soon be replaced by reality.

Across from Second Lieutenant Raleigh, there is the broken and unhinged, Captain Stanhope. This is a man who is beat down by what he has seen and what he has done. There is a haunted look in his eyes as he drifts around the trenches trying his best to instil good feelings within the men. But the all of the booze and the unchecked temper show a man who is barely holding it together; who seems he as if he might snap at any moment. And so, through the smartly handled dichotomy of these two characters in particular, we get a full feeling glimpse of what can happen to a person when they come up against physical and mental battles that are seemingly unbeatable.

And it’s the astounding performance by Sam Claflin that brings all of this to our attention. I’ve seen Claflin in a handful of things and thought him to be a decent actor but seeing him in this has completely reshaped by opinion of him. I want to say it again. Sam Claflin is astounding in this film. He delivers a performance that is award worthy. Anytime he would enter a scene, he would bring with him an intensity that made you want to sit up straight for fear that he might unleash his wrath upon you next. He plays a man on the edge and he never misses a beat in making me believe he was Captain Stanhope. To choose just one of his scenes as an example of his excellent work would only be me doing a disservice to his work. His performance in this film has now very much put him on my radar as someone to look out for.

But it’s not just Claflin who brings a great performance to this film. All round the cast of this film highlights the incredible talent that Britain offers to the medium of film (e.g. Toby Jones, Stephen Graham, Tom Sturridge, etc.). But it’s the man standing tall next to Captain Stanhope (and Sam Claflin), Lieutenant Osborne – played by Paul Bettany – who is the films anchor. He is the man who brings in Second Lieutenant Raleigh – and also we the audience – he sits us both down and makes us feel welcome in hell. Bettany once again shows in this film that he is a British talent to treasure – and whether he’s in blockbuster films that dominate the box office or he’s in smaller little films like this, he’s an actor you can always rely on to deliver something unforgettable.

But I think Journey’s End wouldn’t have been as effective as it was – even with the incredible talent on show – if they weren’t supported by a team of filmmakers who put a lot of time and effort into making the film feel truly authentic. In particular, the film’s atmosphere – which never leaves its side – creates a solemn, harsh tone. This is backed by a score that compliments the harshness of both the environment and Captain Stanhope’s temper. And it’s all made better by the faultless work by production designer, Kristian Milsted and his team. Journey’s End is a film that looks and feels the part. The unforgiving landscape; the wretched conditions of the trenches and the possibility of death at any moment all play into making this feel like a true representation of the time and make it all the easier to empathise with the daily struggles of the characters.

And perhaps most importantly, Journey’s End, in my opinion, does a war film correctly. This film doesn’t glorify the events of WW1. There is no hero standing tall at the end, getting a medal pinned on their chest for saving the day. This is but one story in a much larger conflict and despite the heroism on show, it’s a story that is simply a footnote in a war that consumed so many lives.

We see the horrifying effects it has on the men. The realities of war are unfair; they’re cruel and hard to watch. This film highlights how the best of men can be dragged down into a place they can’t escape. They end up in a place of despair and loss, yet they fight on and do their job because something in them tells them it’s the right thing to do.

Journey’s End is almost like a poem of remembrance that has been translated into a profound piece of cinema. I found it to be a powerful, moving film that affected me deeply! It may have broken me down emotionally at times, but that didn’t stop it from being a worthy film to watch.

I fully and wholeheartedly recommend, Journey’s End. This is no easy watch, and I don’t think it should be. But it deserves to be seen; it deserves to be thought about and films like this serve to highlight why we must never forget about the sacrifices made by so many people. Please experience this film and pass it on to others so they as well, can be a part of something worthwhile.

I’d very much like to know what you thought of Journey’s End and my review of it, so please leave any opinions or feedback you may have, in the comments section down below. I would also really appreciate it if you would consider following both my blog and my Twitter – @GavinsRamblings – as it will help to grow what I’m making here. I’ll bring things to a close now by offering you my thanks for taking the time to read my review. I hope you liked it enough to consider coming back. Thank you,