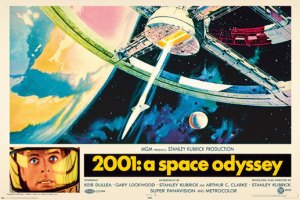 I wanted to do something a little different this week. I had the pleasure of being able to go see Stanley Kubrick’s, sci-fi masterpiece, 2001: A Space Odyssey in the cinema and once it had finished and I was leaving said cinema, I had the urge to write (ramble) about the film a little bit. This won’t be a review, because at this point, far smarter and more well-spoken people have explored all that this film has to offer. Instead, I’m just wanting to gush about the film for a wee bit and also talk about one of the best directors in cinema’s history. So, if you’ll please indulge me for a little bit, I’m going to explore 2001: A Space Odyssey.

Up until now, I have never had the chance to experience (get ready to read that word a lot during this) 2001: A Space Odyssey on the big screen. The largest screen I had ever seen it on was a projector screen in a college classroom – and that was only certain scenes (as we were watching and discussing them), it wasn’t the whole film.

So, as you can imagine, when I saw that it was returning to cinemas, I leaped at the chance to see it, and it was of course not a disappointing experience or decision. Sitting there, as the credits were rolling, I found myself really wanting to express some of the feelings I had when watching the film. I didn’t go in with any intention to write about 2001 – I simply went in for the experience. But here I now sit – late at night and a little delirious from lack of sleep – wanting to explore the film in my usual rambling way.

This now marks my third full viewing of 2001: A Space Odyssey. My first time seeing it, I was pretty young, and it was a DVD that I watched on a small TV, but still, it had a massive effect on me. I’m confident it was this film that opened my eyes to a type of film that I had either not enjoyed or had overlooked. In fact, I think it was both this film and Blade Runner that played such a pivotal role in re-shaping how I perceived films.

This is a film that challenges its audience. It delivers a bold, unique experience that demands more than one watch. I was used to simple films where the plot was straightforward – where the good guys won in the end and everything was wrapped up in neat a little bow. So, when this came along; when it didn’t answer all the questions it presented; when it left me to think about what I had watched and to come to my own conclusions on what it all meant – I realised films could be so much more than good vs evil.

2001: A Space Odyssey resulted in two branching paths for me: It opened my eyes to a new landscape of cinema to explore – films that were different and didn’t play by the rules. It put me on the path of falling in love with the medium (something many more films aided in doing as well) and got me to where I am now where I am fully enveloped in watching, writing and talking about films – something this wee blog plays a part in.

And the other thing it did was introduce me to Stanley Kubrick – a director I have gone onto admire and forever enjoy. Kubrick is one of those special directors (and writer and producer, etc.) whose work seems to transcend time. This film was made in 1968 (9-years before Star Wars: A New Hope) and yet it still feels current – the effects still hold up to this day.

I’m sad to say that this is my only time seeing a Stanley Kubrick film in the cinema, but I hope it’s not my last. I hope more opportunities arise where his films are rereleased in the cinema, so I can enjoy them how they were intended to be seen. Because something new I discovered when watching this film, was the audience experience that I had never had with a Kubrick film. An entire aspect of watching his films has been missing for me. To sit, surrounded by an engaged, enthusiastic audience is something I’ve never experienced, and it was an experience that has now brought something new to my many interactions with Kubrick’s work.

You see, with how Kubrick delivered his films, I’ve always been fascinated with what he thought of the audiences that were watching his films, and subsequently what they thought of him and his work. To me, Kubrick seemed like a filmmaker who was interested in testing the limits of an audience; seeing what they could/would endure and from there exploring their willingness to look beyond what was simply in front of them (2001: A Space Odyssey being a perfect example of this).

If you look at any of his films, there are obstacles that the audience has to overcome. These obstacles aren’t there to make for an unpleasant experience (or not all the time at least) but in my opinion to show the breadth of storytelling within film. Whether it’s the ultra-violence of A Clockwork Orange, the psychological assault of The Shining or the complete mind melting experience of 2001 – there are monumental hurdles that have to be overcome when watching Kubrick’s films, and in my mind it’s one of the many reasons why I adore watching his filmography.

There’s nothing wrong with going to the cinema, sitting down and losing yourself in a big fun blockbuster – I’m someone who relishes the experience when it’s done well. But for me, there’s something special; something more meaningful about summiting a challenging film – overcoming the hardships it puts before you and finding something fulfilling in it all. For me, that’s what it’s like watching a Stanley Kubrick film.

And so being there in the cinema with a modern crowd who are now fully acclimated to the types of experiences offered in films today – it was enlightening and informative to sit there and here the varied response from those around me. This was made all the easier by the fact that there was an intermission – something I had completely forgotten was a thing, but with how humid the room I was in was, I welcomed it. It gave me the chance to hear the conversations around me of people loving the film and reminiscing about their first experience watching it, and it also allowed me to hear the opinions of people who just didn’t get it and were put off by what they were watching.

We live in a point where (I feel) the experiences that audiences get from films are often extremely diluted. The films that dominate are the films that seem to lack any attempt at doing something new or dangerous. And of course, the most dominant genre of all – the superhero genre – is one that I have a love-hate relationship with. But all of the films that currently rule the box office, are ones that have conditioned audiences to a particular type of unoriginal experiences (minus a few exceptions) and that was made all the clearer to me when watching 2001: A Space Odyssey.

This is a film that indulges in all its sci-fi magnificence; that let’s the spectacle play out for as long as Kubrick saw fit. The answers aren’t clear, and the experience is unlike anything else. Hearing the opinions of people around who didn’t enjoy the film was an eye-opening moment, where the overly-conditioned state of Hollywood films became clear to for me see.

It all fed into my larger thoughts and theories about Kubrick and his filmography. It was such an involving experience that I soaked up every moment of. I believe 2001: A Space Odyssey to be a truly special and transformative piece of cinema – I’ve already pointed out the effect it had on me. So, to sit there and be a part of such a night only heightened my love and excitement for film, and also reinforced my love for this film – while also (much to my surprise) enlightening me to where film is at in 2018. It’s a place that I believe isn’t broken or in disarray, but certainly not at its best sometimes.

The impact this film has gone onto have, can be felt in all types of media. One of the most obvious I kept seeing was how clearly this film influenced a director I love: Christopher Nolan. You really get a sense of how much of an influence the work of Stanley Kubrick (and this film in particular) had on him as a filmmaker.

From raising the bar on special effects, to taking sci-fi cinema to new heights, to influencing many creators in their work; 2001: A Space Odyssey is truly a film that has transcended time and cinema and left an indelible mark on it. Even until this day, I believe this film is still influencing creators and still showing how it’s done.

My time and my experience re-watching this film was simply incredible – one I very much want to have again. The exciting thing is that this wasn’t even the 70mm cut of the film (a cut that Christopher Nolan himself helped to oversee) that is being released in IMAX – and so if that ends up in my local cinema, you can be damn sure I’ll be going to see it.

What I want to end this rambling mess by saying is: If you’ve never taken the time to sit down and watch, 2001: A Space Odyssey, I highly recommend you do. And if you have the opportunity to see it and experience it in your local cinema (no matter the quality/format) I implore you to do that! I’ll say it one more time: this is a special film and I hope it’s one you take the time to share in.

Let me know what you thought of this piece – it’s pretty different from what I usually do on this blog. Also, let me know how you feel about 2001: A Space Odyssey. If you liked what you read, may I ask that you consider following both my blog and my Twitter – @GavinsRamblings – as it will help to grow what I’m doing here. But I’ll bring things to a close now by giving you my thanks. Thank you for taking the time to read this and I hope you liked it enough to return!

2 thoughts on “Looking Back (And Subsequently… Forward) – 2001: A Space Odyssey”