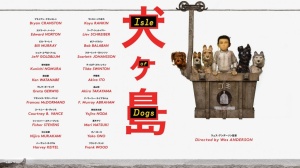 Isle of Dogs, written and directed by Wes Anderson, is infinitely charming and forever witty (as you’d probably expect). There’s such a wonderful feeling that your filled with when watching a Wes Anderson film; the man knows how to put together an experience that invites you in, makes you feel totally comfortable and then guides you along on a journey full of smiles, laughter and fulfilment – Isle of Dogs is all those qualities and more. Now if you’ll allow me, I’d like to invite you on into my review of what is a beautifully crafted film.

Set in Japan; Atari Kobayashi – voiced by Koyu Rankin – goes on a daring adventure to rescue his dog, who has been sent to an island along with every other dog. The mayor of Megasaki, Kobayashi – voiced by Kunichi Nomur – and his family have had a long-standing hatred of the animals and he seeks to wipe them out. A dangerous journey lies ahead for the young boy, but through the help of an intrepid group of dogs, Atari will hopefully be reunited his one true friend.

It shouldn’t come as much of a surprise that Wes Anderson’s new film is paced to perfection and that pacing is noticeably perfect because of how the film achieves it. The score, the movement of the camera, the rhythm of the dialogue in tandem with those elements – Isle of Dogs is like a finely tuned piece of music that moves and flows in the most joyous and comforting way imaginable.

Wes Anderson is a director who knows exactly what piece of music should accompany a scene and what purpose it should play within it. Should is bring the tone down for what is a sombre situation; should it get you wanting to tap your feet as the characters go on an adventure in montage form? Whatever he and composer, Alexandre Desplat feel is right, they will have the perfect piece of music there; accompanying and supporting the film throughout. It’s like a trusty companion – the music – and it never leaves the film’s side. It’s one of the main elements – but of course not the only one – that saw a subtle but constant smile on my face as I watched Isle of Dogs; an emotional response that is usually the case when watching a Wes Anderson film.

Another element to this film that I found joyous and extremely satisfying, while also assisting in the film’s pacing: was the efficiency in which Wes Anderson could be with a single frame of the film. With a simple panning of the camera or a dollying in of the camera, Anderson was able to communicate and expand his story or his characters, or whatever it was he was trying to tell to the audience. It’s filmmaking at its purest. He lets the camera speak for him; it develops the narrative and we simply have to interpret the very clear signs and continue on with the journey. No sloppy exposition, no overly explained points of importance. Just simple movements of the camera or a single frame that flashes up necessary information for the audience, and then things continue to proceed – never breaking the rhythm of the film, never having the film stop in its tracks. Just an unbroken journey that you lovingly follow along on.

I also found it interesting how Wes Anderson handled the translation element of his Japanese speaking characters. He could have very easily used subtitles in the moments a character was speaking Japanese – but that would be easy and not as interesting as what Wes Anderson actually did. Wes Anderson utilises a host of different ways to communicate to the audience what the Japanese characters were saying and each time he did something new; making it a fun little treat to enjoy every time. It’s small details like this that build out into the complete and charming experience that a Wes Anderson film always seems to offer.

And of course, this decision fed into the greater narrative and characters – both of which were simple in construction but completely engaging and enjoyable in execution. The plot isn’t that complex or full of twists and turns but that doesn’t stop it from bringing you along on a journey that is always fun and always fulfilling. I never lost interest; I always looked forward to seeing what magical place I would experience in stop motion animation or what quirky characters with delightful dialogue I would get to experience next. Watching Isle of Dogs was simply an effortlessly enjoyable time – one I never stopped smiling through.

Those smiles were also brought on by a host of lovable characters who are voiced by the always large and varied selection of Hollywood stars that you’d expect in a Wes Anderson film. Jeff Goldblum – who voices Duke – Bryan Cranston – who voices Chief – Scarlett Johansson – who voices Nutmeg –  and of course, Bill Murray – who voices Boss. There is a constant stream of voices you recognise (much more than the few I just mentioned), who are delivering dialogue that is so well constructed for each individual character. They each have their little nuances to how they speak, and it helps to better build out the characters and give them personalities that make them feel different from one another – also it’s of course always full of wit and you can’t help but chuckle along to it. I purely just loved the selection of characters on offer.

So throughout the film, while I was forever smiling, my eyes were being treated to animation that was beautiful to watch. I’ve always been more of a fan of stop motion animation, over computer animation – particularly the new flawless looking work that comes out of the big studios like Pixar. The animation’s to clean and sterile for my liking. I like my animation raw and with little mistakes hidden in it. The animation in Isle of Dogs is a wonder to watch. I can’t begin to comprehend how long it must have taken to do and how many people must have been involved in it. But they’re work was not for nothing, because to simply look at this film and pick out all the little details that fill each frame makes this a film that warrants more than one watch for sure.

Wes Anderson isn’t a director for everyone. His very unique and particular style turns some people away – not me of course. But I think that Isle of Dogs might be one of his most approachable films for newcomers. One that everyone can easily enjoy and find something that attracts them in to see it. And who knows, it might inspire doubters of his work to look beyond this film and explore more of his wonderful and nuanced filmography. But if you’re a fan like me, then you won’t be disappointed with the journey that Wes Anderson takes you on.

There isn’t a doubt in my mind; I of course recommend, Isle of Dogs. There’s not much left to say other than get yourself out to the cinema and enjoy another treat from one of Hollywood’s most unique directors; and if you do, I hope you enjoy it as much as I did.

What did you think of Isle of Dogs and my review of it? Let me know in the comments section down below. Also, it would be great if you could give both my blog and my Twitter – @GavinsRamblings – a follow. But I’ll stop bombarding you with my words now, other than to say thank you to you. Thank you for taking the time to read my review, it really means a lot to me. I hope you have a wonderful day!