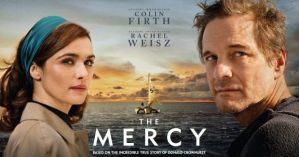 The Mercy, directed by James Marsh, is inspiring, heart-breaking, tragic, and yet completely full of elements that make the journey of emotions worth it. I went in expecting a reasonably simple film that at its core was unabashedly British and came out having experienced a story that surprised me and left me in a mournful mindset. The engaging story held my attention throughout, and despite how emotionally turbulent it was; found its way into me heart and my mind. But enough of this rambling. Let’s get to the review and see if this is a film that you might be interested in checking out.

Based upon a true story, we follow Donald Crowhurst – portrayed by Colin Firth – an amateur sailor who in a solo attempt, set out to circumnavigate the globe. However, the difficulties of the journey proved to be too much for Donald and so began a story that is still steeped in some mystery. While Donald slowly began to lose any hope of success his wife, Clare Crowhurst – portrayed by Rachel Weisz –  and their children sat at home unaware of the hardships their father was truly facing. It is a story that will both warm your heart and break it at the same time.

In the beginning, The Mercy was a warm, inviting feeling film. One of those seemingly simple, quaint little British films where everything seems harmless and wholesome. I immediately felt at ease as I settled into what I thought would ultimately be an uplifting little story about an inspiring adventurer and his wonderful family. Some of that was the case, but The Mercy instead took me on a harrowing journey that I found engrossing and heart-breaking.

Despite the hurried pace (an issue that never went away and one I’ll touch upon in a moment) I found it really easy to connect with Donald and his family. There was a twinkle in his eye that shone bright. I thought of him as one of those intrepid British men from a generation that was eager and unafraid to push forward and achieve something remarkable; all while still caring fully for their family. And the family around him – particularly his wife – were a family who seemed limitless in their love for one another. The film certainly hurried through its introduction of them and the set up of the story, but I still didn’t struggle to find myself wanting to form a bond with them – a bond that would strengthen as the story progressed.

As soon as Donald set off and the impossible task he had chosen to take on became reality, my experience with the film quickly changed. The harrowing, distressing journey that Donald went on – both physically and mentally – was one I wasn’t fully prepared for. This is where the balancing act came into play. We get to experience Donald’s struggles at sea, but still return to home and see both how the family is coping and what is being written/said about Donald.

Those struggles that Donald faced were ones that I found to be genuinely distressing at times. I think that was because of the use of sound. Back home in England, things are comfortable and welcoming. At sea, things are very different. The moment Donald steps onto the boat there is an ever-present atmosphere of unknown danger and fear. The sound design during these scenes intensified these feelings for me. The angry roars of the sea; the haunting howl of the wind; the whining, screeching pains of the boats hull as it tried to sail along. It all made Donald’s descent that much more effective. As the sea and the weather tortured him, as he slipped deeper and deeper into a lonely madness, there was the companion of sound and those sounds communicated a situation that was intensely unnerving and continually getting worse.

So that connection to back home was a key element to balancing out the film. Had it shifted to only being Donald alone in a boat in the middle of the sea, I think an important emotional anchor would have been noticeably missing, and Donald’s descent and ultimate fate would have been far less effective.

And Colin Firth does an excellent job of portraying the hardships that Donald Crowhurst faced. Back home he is charming, trustworthy and has a heart full of adventure, while also still being a father to aspire too. But at sea – alone – we see someone out of his depth and slowly losing control – of both the boat and himself. Firth fully takes on those traits and expresses them in a subtle yet powerful way. It isn’t a performance that will blow you away, but it is once again a memorable piece of work by a continually dependable actor.

Back home, Rachel Weisz holds the warming heart of the film (a warmth that never leaves the film, despite its decreasing hopelessness). She continues to be an actress who delivers a performance that compliments the film wonderfully. She captured the tender, strong nature of the character and delivered a portrayal that had all of my sympathy. Clare was a woman who was clearly struggling – though never willing to show it –  and Weisz was great casting she more than delivered a strong but heart-breaking performance.

Both Colin Firth and Rachel Weisz’s characters were people I cared about – and beyond them there were people who interested me – so I only wish that the film wasn’t so insistent on moving at an uncompromising pace. From the beginning and throughout, The Mercy rushes through… everything. It was never a film that I felt slowed down and took the time to properly explore all that was at its disposal (Donald’s struggles were a particular aspect that were rich for exploration, but the film didn’t give it the amount of time it needed or deserved). I mean it’s not like the film runs long. At only 102 minutes, the film could have easily backed off its hurried pace, extended its runtime a little, and took the opportunity to explore more of Donald’s journey or how Clare was coping at home.

I think what saved the film was what I spoke about a moment ago. It showed us the continued hardships that Donald faced, but it never lost touch with home and with his family. Having that really did help to keep the film alive and full of heart. That heart was what kept me invested, what kept me engaged. I only wish it hadn’t felt the need to blaze through so much of it.

The Mercy was a film that surprised me. It pulled me into a real-life story I wasn’t aware of – one that I’m now very interested and eager to read and learn more about – and it very much tore at my emotions. While it was a film that would have certainly benefitted from slowing down and allowing some more time for things to develop, I still think it did a good enough job with what it offered in the end.

I’m going to recommend, The Mercy. It tells a story worth knowing about a man and his family worth learning about. It won’t leave you feeling great, but it will leave you with feelings that are worth experiencing. I hope you find the time to see this film and I hope you find some enjoyment within it.

I’d live to know what you thought of The Mercy and my review of it, so please leave any feedback or opinions in the comments section down below. Also, if you’re feeling kind, would you consider following both my blog and my Twitter – @GavinsRamblings? But I’ll bring things to a close now by saying thank you for taking the time to read my review, and I hope you have a great day!