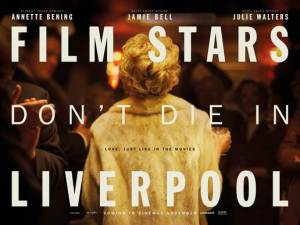 Film Stars Don’t Die in Liverpool, directed by Paul McGuigan, offers charming, intimate little snapshots of a touching relationship, that warms the heart. There is something so beautiful in this films simplicity; with its lovely characters, its sweet story, the time in which it’s set and the places it goes – it puts you in a wonderful state of mind. It of course pulls on the heart-strings and tells a story that will, at times hurt, but it’s worth it. Let’s explore deeper into why the film is worth it, in my review, shall we?

Based upon a true story, the film, set between 1979 and 1981, follows once famous Hollywood actress, Gloria Grahame – portrayed by Annette Benning – and Peter Turner – portrayed by Jamie Bell – who embark on a tender, adventurous romance. The age difference between the much older, Gloria and the younger, Peter seems unexpected, but results in two people who truly love each other, and want to share their lives with one another. It of course isn’t all simple and some hurdles will be put in their way, and some of them, they might not both be able to get over.

I found it really interesting the way in which the film structured itself. It begins near the end of Peter and Gloria’s story and then transitions back to the beginning – almost like it is working from both the beginning and near enough the end, and making it so that both meet in the middle. I’ll return to this aspect more in a bit; I wanted to lay that out so that I could talk primarily about the characters first and how this structure effects how we learn and take in their relationship.

Both from a performance standpoint and a character standpoint, Annette Benning / Gloria Grahame and Jamie Bell / Peter Turner are wonderful. Both actors have an uplifting chemistry; each scene feeling full of cheeky, meaningful interactions between the two. And then when you mirror that with the latter half of their relationship, there is a much different tone to them and while it is a much more dower one, it is still in some way beautiful to watch them together. There’s a level of nuance to their interactions that offers more than what first seems to be the case and makes for a watching experience that is not always as conventional as it seems.

There’s a way that Peter looks at Gloria in the beginning, that almost says, ‘I can’t believe I’m with you.’ Every time he’s with her, he looks on in with a fulfilment, like he knows he has found someone special. But later on, when Gloria is sick and can’t do anything for herself, those looks are now ones of a worried man who is unsure if he can cope with the tough decisions he now must deal with. Jamie Bell’s performance is one where you get just as much from his actions as you do his words. You really do gain just as much from a scene by reading the faces of the actors, as you do listening and taking in the surroundings.

Whereas Gloria has a much more dominant presence in the beginning. As the older one in the relationship, she’s much more sure of who she is and what she wants. That confidence is forever present in the beginning of their relationship. Gloria almost always has the last word and usually they are witty little retorts that let Peter know who’s in charge. And then later on, all of that is gone. Gloria struggles to stand, let alone control a room. If anything, the film really does highlight how fickle life can be – how quickly it can creep up on you.

The film structuring itself the way it does, allows us to really get a fuller picture of Gloria and Peter’s relationship. We see it from its inception to its inevitable end. For the most part we see snapshots of their relationship; the important parts, which leaves the audience to interpret the rest. We fill in the necessary blanks. What we learn about them and the time we spend with them, makes filling in the rest of the picture very easy – most of the work is already done for us. It did leave me wanting more; I would have probably preferred a little more depth, but the film is certainly not without it.

Perhaps the most impressive aspect of the film’s structure is that it somehow has a compelling, powerful ending occur in the middle of it. Working from both the beginning and the end means that the two inevitably meet in the middle and it is at that middle point that the film hits you with an emotionally heart-breaking moment. Discovering why Peter and Gloria split, plays out slowly and once again in a structurally interesting way and it packs a real punch. And once it has done so, the film then still has its proper ending after that. So you technically get the conclusion to two big aspects of the story and both do not disappoint in making your emotional core weep.

The way in which the film transitions between the two points in time, always got a smile of respect, as it was clever and really well done. The editing in these moments was particularly fantastic; seamlessly moving from Peter’s house to the arrival area at LAX and having it feel so natural. Each time it does it, it tried something new. It was always a nice little treat to see what clever way in which they would move from one point of time to another and it never disappointed.

When I first saw the trailers for this film, I expected a sweet, but relatively simply love story. So it came as a nice surprise to see a film tackle its story in a relatively unique way. Also as someone who is obsessed with film, I really appreciated how this film shows its love for cinema; especially classic cinema from a time long past. I personally have never had the pleasure of watching one of Gloria Grahame’s films, but after seeing this, I have certainly been inspired to seek them out and experience them.

I happily recommend, Film Stars Don’t Die in Liverpool. A simply lovely little film that tells a beautiful story and tells it well. It will of course emotionally hurt a few times, but that doesn’t take away from the fact that it’s worth enjoying.

I’d love to know what you thought of both the film and my review? So please leave any opinions, feedback, etc. in the comments section down below. It would be great if you could give both my blog and my Twitter – @GavinsRamblings – a follow. But I’ll finish up now and thank you for taking the time to read my review. Have a fantastic day!