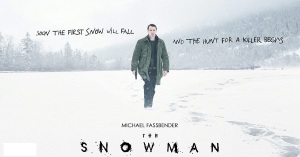 The Snowman, directed by Tomas Alfredson, is a perfect example of a film that is completely unable to coherently manage the source material it is based upon. A poor start that sees most of the necessary set-up being overlooked and then a lack of any proper exploration of the characters and the plot, quickly sees this film becoming a mismanaged, dull detective story with no thrills and nothing to hold your interest. I was looking forward to this film, but alas, it failed to deliver on what could have potentially been an exciting, unsettling film. So let’s explore where the film went wrong and if there is anything that makes it still worth seeing.

Detective Harry Hole – played by Michael Fassbender – teams with Katrine Bratt – played by Rebecca Ferguson – to investigate a string of murderers, that sees the killer leaving behind a snowman at the crime scene. Larger players seem to be at play, and Katrine Bratt isn’t revealing the whole truth as to why she’s so interested in the case. The troubled Harry will have to manage his demons, if he wants to stop the killer from taking another life.

I haven’t read the book (written by Jo Nesbø) that the film is based upon, but it isn’t a stretch to imagine that it is able to give the necessary time to fully developing out its many elements and make them enticing enough to make you want to keep reading. You see, the film had many elements, that if they had been given just a little time, or any sort of depth, they might have made for a thrilling experience that had you gripping the seat. It’s plot, the characters, the setting etc. There was much for this film to work with but instead it just gives the bare-minimum of effort, thus everything feels shallow and overlooked.

The beginning of the film is really poorly managed. Other than establishing the motive behind the serial killer’s actions (which was perhaps the only well-handled set-up for a character) everything else is rushed and never given the time to make itself known. It’s in the first act that the film shoots itself in the foot – it indefinitely injures its chances of growing into a compelling film by not properly setting up or giving some proper background to its main characters and the investigation that they will soon set on. Before it’s even got going the film puts itself in a position that it is never able to recover from.

Harry Holl (the main character) is a prime example. He is your typical anti-hero detective – or at least he seems to have supposed to have been. He’s a troubled drunk, who messes up with his family and is almost never at work. But the film never gives a reason for him to be this way. It seems we’re just supposed to accept his troubled ways and move on, without the necessary reasoning behind it. Now, while it is clichéd to have the drunk, self-destructive detective leading an investigation into a disturbing case, if it is done well, it can be really enthralling to watch. One damaged person facing off against another.

The reason why I think people enjoy this particular narrative choice is because of the possible reward at the end of it. To watch someone who might be damaged beyond repair, try to right themselves by accepting the demons of their past and also using the particular case to learn about themselves. It can be really engrossing. That arc, of someone trying to get back to who they are and maybe failing is something that can elevate a basic crime thriller into something more. The Snowman has none of that. Harry Holl has no arc. He does not better himself through the case that plagues him. He simply exists as a bland, poorly developed person who by the end feels no better improved or understood than when we first meet him.

It’s a shame, because Fassbender seems like great casting for the role. Some of his previous work, where he has played troubled characters, is proof of this. But despite his efforts, he is unfortunately given nothing to work with. While the make-up and the physical demeanour communicate a man who is struggling, the actual thoughts and actions of the man do not. Harry could and should have been the central point of the film, that everything built out from, but he isn’t. From there, everything else crumbles due to lack of support.

Both the characters and the actors; Katrine Bratt (Rebecca Ferguson), Arve Støp – played by J.K. Simmons – or Gert Rafto – played by Val Kilmer – are completely wasted. There was a clear attempt to have Katrine’s secondary plot (which fed into the larger story) be of importance, but the handling of it makes it feel like it’s disconnected from the rest of the film, at times. There is no clear direction in it and its never properly explored in a way that makes it interesting or easy to follow. And then weirdly, in the end it’s discarded as if it was nothing. Katrine’s entire story is used as a cheap plot device, leaving her feeling like she’s not a person with a part to play but rather just something for the film to utilise to make the story flow the way it wanted too. And Val Kilmer’s inclusion was just baffling. All of his dialogue for some reason had to me ADR’ed (Automated dialogue replacement) and it was just uncomfortable and ever so slightly creepy to watch, which I don’t think they intended it to be when the initially shot it. And J.K. Simmons simply has nothing to do.

There was simply a lack of coherence to the film. Sporadic editing sees the film jumping around and never focusing on things in any meaningful way. It was as if there was a level of impatience when they were putting the film together. Scenes feel rushed, as if they’re desperate to get to the next one, only to rush those ones as well. It’s not how you want a story like this to be handled. It’s a crime thriller. You want your investigators to be pouring over evidence, chasing down possible witnesses, while also balancing it out with the main character’s everyday lives. This film has all those elements but doesn’t know how to construct them into an engaging experience where we feel like we’re taking part and are tense as to what the killer may do next. There feel like there are chunks missing and they tried to patch it together with what they had, but it left things disjointed and confusing.

With the film having no coherence, or anything to take a hold of your attention, it means it then lacks a component that is crucial for an experience like, The Snowman: any hint of tension. When you have an efficient, uncompromising serial killer out there, who is murdering people in horrible ways, you expect to be on edge anytime they are possibly around. But I couldn’t have been less tense. I sat there during points that were probably supposed to be tense, continually wondering why I was supposed to care? The film had given me no reason to. Everything that had come before had not enticed me to engage and subsequently nothing did to change that. I sat there in a disconnected state, bored beyond all measure. Not even the city of Oslo it utilised. With it’s cold, harsh look, it could have been used to create an uncomfortable atmosphere, but instead it is shot in a very flat, almost obscured way, that gives the city no hint of identity. Everything is wasted in this film.

The only thing that stirred some level of enjoyment within me, was that I correctly guessed the identity of the serial killer, the moment they appeared on-screen. So, when it was revealed to be that person, I was pretty chuffed with myself.

But despite that morsel of enjoyment, I DO NOT recommend, The Snowman. Is there anything worse than a boring crime thriller, where you don’t even get to enjoy the thrill of figuring out the case with the protagonist? So yeah, don’t go see this film, it will only disappoint you.

What did you think of the film and my review of it? Let me know in the comments section down below. I’d really appreciate it if you could give both my blog and my Twitter – @GavinsRamblings – a follow. But I’ll bring this review to a close now, by thanking you for reading it and wishing you a wonderful day.

One thought on “Review – The Snowman”