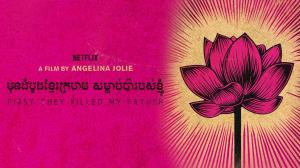 First They Killed My Father, directed by Angelina Jolie, approaches its harrowing story from a very interesting perspective. That perspective helps to shine a very different light on the events that the film follows, but it does also hinder the film at times; causing we the audience to not always feel like a part of the larger story. At times, it was struggling to fully hold my attention, but then at other points I was completely gripped by it. So, by the end does it deliver a film worth seeing? Let’s answer that question together, in my review.

The film tells the true story of human rights activist, Loung Ung – portrayed by Sareum Srey Moch – when she was 7-years old. Taking place in Cambodia we learn of her life altering story after a militia group – known as Khmer Rouge – saw an opportunity after American forces pulled out of the country – due to their defeat in Vietnam – and went onto seize control of the country. They then went onto send the majority of its population to work camps where hard labour, little food and death was all that there was. It is an unimaginably difficult story and all of it is from the perspective of a young, confused little girl.

Much of the power of this film comes from the fact that the majority of events are seen through the eyes of a 7-year old girl, who simply wants to go home and have things be as they once were. We know that won’t ever be the case and what is ahead of her is going to be something that forever alters the rest of her life. There’s something powerful about that; to watch and learn the story of someone who must go through the most horrible of events and then not let it be the end of them.

Taking an event like what happened in Cambodia and seeing it from the perspective of a little girl, really puts things in a light that we don’t usually ever see or experience. To see things through her eyes; where the world and the events tower over her and us can be an almost humbling experience. We the audience are used to being in a position of power; whether that is through the knowledge that we have or through the protagonist that we are following (who is usually a capable, formidable individual) we are usually pretty comfortable and familiar with the surroundings and how it will play out.

But in this film, that is very much not the case. Loung isn’t someone who can make a significant change to her situation. She can’t influence or fight back against her opressors. She must listen to her father and do what she is told. What she knew of the world was what her mother or father told her. That can be uncomfortable; not having the usual safety blanket that we have in a film like this. Much like Loung, we the audience are powerless. We don’t know everything; the deeper facts of the situation elude us as well. All we know is that things aren’t good and even through the naïve eyes of a 7-year old, that is clear to see.

And what I think makes the presentation of the film all the more effective is that Angelina Jolie and cinematographer, Anthony Dod Mantle, very smartly had the camera be an extension of Loung. The camera is as much a part of the story telling as Loung’s life is. Jolie and Mantle use everything about the camera to aid them in bringing Loung’s story to life, and I think it’s one of the most effective aspects of the film.  It is lower down, like Loung obviously is, so things are obscured from our sight because of this. The world also seems different; the focus of the camera (for the most part) is not on the bigger picture but on the specific events that effected Loung and her family. To look across a field and see Loung’s weeping, crumbling mother, who has just received some terrible news and to know that it is this little 7-year old girl seeing this and trying to comprehend it, is something that just punctures your emotional core and makes it want to cry out.

Much of the incredible or haunting imagery in this film is made all the more potent – all the more intense, when you consider the fact that you’re seeing it through the eyes of a young girl. To see an explosion in the reflection of Loung’s eye or to look upon a minefield littered with shredded bodies, only to pull back and see her in the middle of it all, makes the film all the more mighty when you know that these were Loung’s real-life experiences. These were impossible hardships that she had to overcome. That makes for something very moving.

But Jolie quite smartly doesn’t keep is fully locked to Loung’s memories of the time. On multiple occasions she takes the opportunity to pull the camera away, put it up high and show us a much clearer view of the scale of the horrors. Known as ‘God’s Eye View’ the particular angle that Jolie and Mantle continue to return too, is just as effective as when we only see things from Loung’s view. It’s just that when we’re high up it gives us the audience a chance to really take in the magnitude of the situation. It helps to put the larger conflict in a perspective that fills in the gaps (slightly).

But the specific choice to keep the film contained to Loung and her story, does at times feel limiting for the larger story. Being locked to Loung and her view of the events can create a sort of passive experience. She for the most part is an observer; looking upon horrors, being powerless to do anything or influence anything. And so, we the audience can feel like less of a participant in the story and more like a passive observer. In a strange way, the film is both immersive; experiencing Loung’s story from her perspective, but then it is also a film that feels like it’s pushing you a way, as you don’t feel like you are a part of the larger story, instead feeling more like you’re being left out of something greater.

For me (at times) the story felt less like a complete one and more like little snapshots in time. We glimpse at very specific moments but aren’t given the option of greater context or clarity for how things are progressing. You can make assumptions of the situation based upon how the environment has developed or people have degraded. But it’s never truly clear how things are progressing and at what pace they are progressing. This is because the film is locked into being from the perspective of a young girl who won’t be aware/privy to this sort of information, thus the snapshot memories is what the film builds itself around.

And so, I return to the point of it feeling like an experience that both pulled me in (with a particular, powerful aspect) but also pushed me away because of how lacking it felt in its larger story. But the one thing the film always had was Loung and I think its handling of her is brilliant. It’s subtle, in terms of her development, and it is unwavering in having her being the central focus (which is both a good thing and a bad thing). But the growth of the character is something that really pulls the film together. To see her go from a scared, confused little girl who wishes for the comforts of home, to a smart, capable person who can fend for herself and know how to keep herself safe, was for me, one of the most satisfying and rewarding aspects of the film to watch. The film dedicates its focus to Loung and it does not fail her.

So yes, the film struggles with how it presents its larger story and there were times where I myself found it difficult to give my full attention over to it. But I feel it fully succeeds at telling the story of Loung. And for me, in the end, made the whole watching of the film worth something.

I am going to recommend, First They Killed My Father. This film tells an important little story, of a brave little girl and its handles that aspect perfectly. It is because of that, I think it should be seen.

I’d love to know what you thought of the film or my review. So please leave any feedback, opinions etc. in the comments section down below. I’d also really appreciate it if you were to give both my blog a follow and my Twitter – @GavinsRamblings – that would be great. But I’ll finish up now by thanking you for your time and hoping that you have a brilliant day!