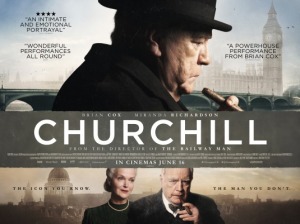 Churchill, directed by Jonathan Teplitzky, is a wonderfully sincere, emotionally powerful look at one of the many interesting times in Churchill’s life. First and foremost this is a character driven film and it does a tremendous job of exploring its primary character with a sense of heart and honesty. As a lover of history, I found this film to be informative, humorous and most importantly, powerful. And so let’s talk about those qualities (plus many more) in the fuller review. On to it we go.

The film follows Winston Churchill – played by Brian Cox – in the few days before the allies attempt the greatest assault of the entire Second World War; D-Day. But it is a mission that Churchill himself does not believe in or support and so we see as the man, who has been at the forefront of the entire conflict, start to see his power and his influence begin to be slowly taken away from him. It isn’t a story that is perhaps widely told but it is one that in this film, certainly grabs hold of your attention, and that is mainly because of one man; Winston Churchill.

It is both the performance by, Brian Cox and the man he portrays, Winston Churchill that this film finds and then offers the most amount of emotion and worthwhile attention. But let’s separate the two for a moment and discuss them separately. Brian Cox is sublime in this film. He brings the fiery, larger than life attributes of the man to screen, and he also delivers on the more delicate less seen side of Churchill. Brian Cox finds a balance between all the facets, meaning that you end up watching a performance that is rousing, resonant, nuanced and emotionally fulfilling.

It is also one that forever controls the screen – it would be odd if a film called ‘Churchill’ didn’t point all its focus onto the man. But both the man and the story that the film chooses to focus on are ones that are extremely interesting and filled with such subtle, yet powerful emotion. And so much of that of course comes from the other aspect I wanted to touch upon; Winston Churchill.

The film offers an up-front portrayal of him; it does not shy away from showing him in his weaker moments. It’s not often that you see such divisive sides to him (but I understand why). Still, seeing where Winston Churchill was mentally during that time of the war is really revealing, and something I felt built upon the mystique.

To see the struggle that Winston Churchill faced during the later parts of the war; with his influence within the military and government seemingly waning and the people closest to him finding him to be a difficult person to communicate with – these are all very enlightening things, and I feel they didn’t (and don’t) diminish his character in any way. The film shows these weaker moments because on the other side of those moments is a man who discovers he still has purpose and can still make a difference, and in that there is something really beautiful.

Which is what I think is one of the films greatest achievements. With everything that is going on at that time in Britain and the rest of the world; with all the souls being lost and the hurt that is being done, this film decides to show the beauty and the true heart within the man who helped lead a country and war to better times – to victory. So even in the films limitations – its condensed focus – it still does offer something that means something.

But there is more to the film and what one of them certainly is, is the level of craftsmanship and care that went into the way in which the film was shot and looked. There were subtle, narratively poignant little edits in the film; moments where exterior footage would fade in (ever so slightly) and then disappear again. It added something; it heightened the scene and made even more emotion flow through it. The film is also very generous to its characters, in terms of camera placement and the focus of the characters. You will never miss the brilliance of Brian Cox’s performance in the film as it makes sure to give him as much of the screen as he wants, and with so much screen, he shows us exactly the quality of actor he is, which in turn shows us more of who Winston Churchill was. It’s a film that gives over most of its focus and attention to the characters and their performances but it also never forgets to show something beautiful; something that highlights the British history and spirit during the time.

Now I’m not saying this film is perfect, because it isn’t. For me the supporting characters were lacking in the necessary development to then be an adequate accompaniment to both Brian Cox’s performance and Winston Churchill the man, and the clearest example of that is, Clementine Churchill – played by Miranda Richardson – who for me was deserving of more from the film but she sadly just didn’t get it. So much of the focus is given to Churchill, that the others around him don’t’ feel as well established or fleshed out, which then did leave some moments lacking the full punch that they seemed to want to throw. And it’s also very clear when you watch the entire film that its scope is very limited (perhaps because of the limited budget) and so this isn’t a film that will initially grab a hold of your attention and keep it locked to the screen. It is not a wowing experience from beginning to end; there are moments where it lulls for sure.

But for me those problems weren’t ever something that took away from the primary experience. In the end I found this film to be respectful of its content; the people it showed and the stories it told, and most of all its handling of Winston Churchill was – I feel – beautiful.

I’m recommending Churchill. This film will probably get lost in the noise of the summer blockbuster season, which is a shame. Because of all the films I’ve seen on the blockbuster side, this film absolutely out-does them. I hope you find the time to watch this film and enjoy the many wonderful qualities it has to offer, I know I did.

There’s a comments section down below and I’d love it if you would populate it with some of your opinions or feedback etc. about my review or this film. You can follow my blog directly or you can follow me over on Twitter – @GavinsRamblings. But all that really matters in this segment is me giving my thanks to you. Thank yo for taking the time to read my review, it really does mean a lot to me when people take the time to read my stuff. Anyway, I’ll leave you to get on with the rest of your day now.