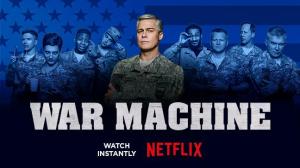 War Machine, written and directed by David Michôd, is a film that approaches its main topic in a tonally surprising way. It then also evolves its tone in a way that doesn’t usually work out well, but in War Machine, it actually elevates the effect of the overall film, and helps it to surprise you with a few emotional gut punches that you don’t see coming. And then there is of course the very interesting performance from, Brad Pitt – a performance that I think will divide opinion. But let’s dispense with the intro and the sweeping statements and actually get into the more detailed review. So let’s get to it.

The film tells the real life story (though there are moments of parody as well) of General Glen McMahon – played by Brad Pitt – who stepped into the role of trying to clean up the mess that was the war in Afghanistan. However, he didn’t see it as a clean-up job, he saw it as a job with an end goal, and that goal was to win the war. Never pulling any punches, the film offers a savage portrayal of both the men in charge and the decisions they made throughout their time in command.

So I was surprised at the tone that this film took. It was a more comically charged feeling film; with many scenes focusing on the ridiculous and the more humorous side of the situation. I found it to be so jarring, that I didn’t find myself engaging with the film at first, I was just so focused on trying to figure out what type of film, War Machine was. I did still chuckle at things and I was really intrigued by the characters and the story that was being presented to me, but overall, it was the films tonal presentation that had me the most quizzical.

But then it all started to become clearer; the film revealed more of what its intentions were, and it also accomplished something that a lot of films struggle to do. War Machine not only fully committed to a tone and an approach of storytelling, but it then slowly transitioned into a different one, but never did it in a way that felt unnatural or jarring.

The film goes from an over the top, satirical parody, to a more biting political commentary, with some really harsh truths thrown your way.

But let’s circle back a moment. The reason why I think the films initial approach worked so well in telling its story and highlighting the individuals within that story, was that it never shied away from being brutal in its presentation. This film does not paint the people or the situation in a good light; it does not ignore the lies, the egos or the failings of people, it puts them front and centre, and then has fun with them, at their expense. Unlike many other war films (particularly ones taking place in Iraq and Afghanistan), War Machine does not present the situation in a way that is overly positive and where the good guys come out on top.

To me, War Machine felt like a political mockumentary at times (even though it’s not shot like one). The way in which it mocks the bureaucracy, the men with the puffed out chests, the egos that clash and prevent anything getting done. It is a film that doesn’t hold back and is very up-front in its opinions on the handling of the whole situation.

But then the film did something that not only was I not expecting (as I had settled into the particular presentation and rhythm of the film) but then couldn’t believe how well it did it. The film began to slightly alter its tone; it began to shine a different kind of light onto the situation. Now this was a light that it had shone ever so slightly in the beginning, and it was done in a way that really hit hard. But nearer the latter half of the film, it doubled down and it began to show the tragedy; the hardships that come when the men at the top are unwilling to approach the situation in a way that doesn’t leave the people lower down the totem pole in danger, or in a place where support is not there.

War Machine certainly has fun with its content; poking fun at the people and the decisions. But I think what it does best, is then pull the curtain aside and highlight that there were serious consequences for these people’s decisions, and while it’s fun to laugh at them now, what they did was… well, plainly wrong.

And the person who is front and centre in all of this is, General Glen McMahon (Brad Pitt). McMahon is one of those bigger than life characters; the kind you hear about and can’t believe that there is someone as unique and distinctive that exists. From the first time he appears on-screen and we begin to learn about him, till his final scene, I was really fascinated by him as an individual and as a man in charge of the Afghanistan conflict. He seems like someone who the military grew in a lab and bread him for the purpose of being a soldier and nothing more.

But with all his accomplishments and all of his unbroken routines, he is a man with failings. To watch someone who is so powerful and so sure that their way is the right way; well you can imagine just how interesting it then is, to watch them take on a task that they not only botch, but do so in a monumental way.

But then there is also an even more interesting aspect to, General Glen McMahon and that is the performance by Brad Pitt. I foresee this being a performance that divides people; some liking it and others hating it. I have to say that I wasn’t fully on-board with it at first. Pitt makes some very interesting choices when it comes to his portrayal of the General; whether it was a very odd style of walk/run or it was the little ticks within his facial expressions, there is certainly something about it all that stands out. And so for some, it might be too distracting, it might be a little too odd for them to take seriously. I by the end was on-board, as I thought Pitt did a great job of portraying this bigger than life person in a way that felt parody-ish but also at the same time, genuine and with some honest humanity.

It took watching the whole film for me to understand the full scope of what Pitt was going for (and the film as well). So while his portrayal is certainly one that mocks parts of who the General was, there are moments where we see a solemn, defeated side to him. It was in these subtle, yet emotionally potent moments that I felt he showed a fuller, more well-rounded arc to the character. It not only did a lot for the character, but it also helped to support the narrative that the film was going for. In the end, both the man and the mission have their mistakes put on show – which sounds a little cruel, but in the case of this story, it’s actually pretty fair.

But it was of course not only General Glen McMahon who was a part of the mess. There is a greatly defined supporting cast of people who build out the unbelievable ego and gall of the whole situation and its handling. They all play their part, and are backed up by some good performances; Anthony Michael Hall – who played Major General Greg Pulver – is one in particular who stands out. His quiet and then at times not so quiet rage was not only comical, but said so much about the types of people who were put in a position of power. So again, the characters (which have some solid performances behind them) help to play into the balance that the film has; a balance that isn’t always supported, unfortunately.

Speaking of which; there were two filmmaking aspects which I think were more of a let-down/distraction, than a support/contributor to the experience of, War Machine – the first being the general look of the film. War Machine is a flat, uninspiring film to look at. I can’t pinpoint why, but just the bland look to the film really stood out to me. Now I’ve watched plenty of films where its visual voice didn’t speak to me and it wasn’t something that necessarily bothered me, but in this film, for some reason, I just couldn’t help but notice just how lacklustre it all looked. There were perhaps 2 scenes which spoke to me, and offered something that caught my eye, but then it would simply return to its flat, grey, static shots where it was really only your mind that was stimulated, while your eyes and ears were either ignored or assaulted.

It is your ears that are assaulted, and this is also the other aspect to the film that I felt hindered the balance of tone that the film had gone to great effort to accomplish. There is absolutely no consistency in the music choices in this film. It genre hopped from one bizarre song choice, to another, never seeming to understand what type of tone it wanted to fit into. It was nearly always a distracting choice – almost as if they were just using someone’s Spotify playlist as a placeholder, but then forgot to actually replace them with sensible choices. There were a few moments where the music would fit the emotional tone of the film perfectly, and it was in these moments that it would help elevate the moment. However, most of the time, I found the music to be nothing but an annoying distraction.

War Machine is an interesting one. It was not the film I was expecting, and its approach to nearly every aspect of its characters and story was something that I felt to be an odd choice. But, in the end, I felt it worked. I was both entertained and engaged by what, War Machine had to offer. I will say that the title of the film, ‘War Machine’ is perhaps not the best choice, as it makes it sound like a very different type of experience; one filled with action and intensity (which it does have a little of). Whereas what you actually get is an unforgiving exploration of people and their decisions. Perhaps a better title would have been, ‘The Theatre of War’, but hey, that’s just me unnecessarily adding that last tid-bit in.

So what did you think of, War Machine? What did you think of my review and the opinions of the film? Let me know in the comments down below. If you’re interested in knowing when I post a new review, may I suggest both following my blog directly and following me over on Twitter – @GavinsRamblings. That way you’ll always know when I post something new. All that’s left to say is thank you; thank you for taking the time to read my review and I hope you liked it enough to return at some point.