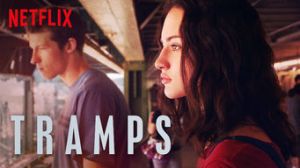 Tramps, written and directed by Adam Leon, is a very small, very simple film. In fact it’s perhaps a little too small and simple for its own good – at times. It is in the films leads that this film shines, and through their new, fast developing relationship that I found the most enjoyment. Beyond that it is a very bare bones affair, which isn’t actually an overall negative, but it certainly is an issue that causes the film to stumble and not fully complete what it sets out to do. But let’s wrap-up this intro and get on with the review itself, and see what it is that Tramps has to offer.

Danny – played by Callum Turner – is forced to help his brother (due to him being in prison) with a shady deal where he must swap one briefcase with another (the contents of which are unknown). He has the help of, Ellie – played by Grace Van Patten – who is the driver on the “job”. Things of course go wrong and both Danny and Ellie find themselves in a difficult situation where getting a hold of the correct briefcase is a must, or the people in charge will not be too pleased. But the positive that comes out of the whole situation is the newly forming relationship that begins to build between the films leads. It is in that part of the story that the most joy comes from.

The dichotomy – that’s the thing that makes the films lead characters so interesting and rewarding to watch. Danny is a nervous, quiet lad who enjoys cooking and has no want to get wrapped up in his brother’s criminal antics. Ellie is a no-nonsense gal who wants to get her life on a good track and is willing to break the rules to get what she wants. Now when you put two individuals like that together, and then watch how they develop with each other – well that creates some insightful, uplifting moments that are simply enjoyable to be a part of.

The personalities of Danny and Ellie shouldn’t really work together. They should collide and bounce off of one another, heading in opposite directions. But instead they collide and then begin to blend; creating something sweet; something wonderful in its innocence. Oh to be young.

Every moment in which these two characters were together on-screen, developing a new friendship; a new relationship, and evolving as individuals was just effortlessly enjoyable to watch. That is of course in part thanks to the writing and also the performances. They all come together to deliver something you could watch much of. In fact that was my main gripe with, Tramps. While it gave me a newly forming relationship that was rewarding to watch, it didn’t give me enough of it.

The film in total is 82 minutes in length. And so the film does feel rushed. The time between Ellie and Danny first meeting and then them starting to get closer is quite short. And then beyond that, the time spent with them just isn’t enough. Only another 20 or so minutes on top of the existing runtime would have been fine. Just a little extra breathing room and some time to more fully explore Danny and Ellie’s situation would have made all the difference.

But still, they are the life-blood of the film and it is in them that this film shines. The plot that guides them sees them going on this unexpected journey together but it is pretty paper-thin in terms of content. You don’t really know what’s going on and who is orchestrating it all, but you know that it matters to Ellie and to some extent, Danny as well. Thus you want to follow along and see where they end up, but it doesn’t necessarily hold your full attention – compelling is not the word I would use to describe the films main plot.

I suppose the reason for the simplicity, the length and the scale of the film is probably due to its small budget. Tramps has a real small-time, run-and-gun style to it, where it’s almost as if they were shooting scenes where ever they could. It gives the film a real fresh, fast feel to it. Moments can feel spontaneous in the way they are shot and executed, which all makes for a more engaging experience – rooting for the underdog, almost.

Despite how quickly the film reaches its conclusion, I do think it paces itself out reasonably well in the middle. When it needs to, it moves things along; aided by a soundtrack that has you tapping your feet and feeling like the film has momentum behind it. And then it also finds moments to take its time and let its two brilliant characters shine.

Its films like Tramp that work well on Netflix. This isn’t a film that would work in a cinema environment; it would get drowned out by all the noise and scale of the bigger, more noticeable films. On Netflix, a small, intimate film like Tramps has the chance to tell its own little story and get itself in front of plenty of eyes. And I think it is another reason why this film ultimately works.

It isn’t a perfect film by any stretch of the meaning, but it is a film that accomplishes something endearing and wholly enjoyable. By the end of it I was satisfied with the time I had spent with it and I liked what it had to offer. I only wish there was more, which if you think about it, is a compliment – I liked it so much, that I would have happily given over more of my time to it.

And so I am going to recommend Tramps. When you come across this one on Netflix, add it to your queue and make the effort to give it a watch. I think you’ll be happy that you did.

I’d love to know your thoughts on Tramps and I’d also love any feedback you have on my review. So feel free to leave your thoughts, opinions, feedback etc. in the comments down below. Feel free to follow my blog directly and also give me a wee follow over on Twitter – @GavinsRamblings. That way you’ll always know when I post something new. Thank you so much for checking out my review and I hope to see you return.