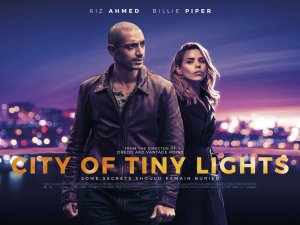 City of Tiny Lights, directed by Pete Travis, does not deliver a unique or original story by any stretch of the matter, but what it does do is offer up a lead character that you are interested in, and soon fully invested in, and thus you can’t help but want to be a part of his story. And it is his personal story, the past that is now resurfacing, that makes this film as compelling as it is. So there is of course more to be said about this film and this review in its fuller form is the best way to do that – so let’s get on with it, shall we?

In the film we follow private detective, Tommy Akhtar – played by Riz Ahmed – who is asked to help find a missing women. The woman in question is a prostitute, and her flatmate, Melody – played by Cush Jumbo – is worried after she doesn’t come home one night. Tommy ends up getting wrapped up in something bigger than he first expected and things only get more complicated after some important people from his past resurface, and it seems that some of those people may, in some way, be involved in the mess that Tommy has gotten himself mixed up in. Secrets and memories will get themselves wrapped up in a plot that Tommy may not be able to fully handle.

For me, quite a bit of this films main plot and structuring felt like the cop dramas you get on a Sunday night on BBC. Now I’ve seen a few of them in my time and they don’t really ever stray too far from the path – City of Tiny Lights is no different.

The weakest aspect – which isn’t really fair to say as it is a well-constructed plot – is that the story in the film is one that you’ve probably seen before. Now like I said, it is well-constructed and it never felt shoddy in its presentation; it’s just that it never really surprised me, or had me fully engrossed. I was with great ease able to predict (correctly) who the culprits of crimes were and what their motivation was. And that comes from the fact that the main story in the film is a lot like many other dramas where solving a crime is the main focus.

But again, it is not a plot that is badly handled. I was still interested enough to see how particular elements would play out, and also if my predictions would turn out to be correct. Also, if you are a fan of these types of stories then City of Tiny Lights is going to hold your attention, as director Pete Travis does make sure that what he is putting the attention on is compelling and at no point bland in its presentation. The only main gripe I have with its handling is with some of the dialogue. It is either expository – in such an in your face way that you can’t help but roll your eyes – or it is just really awkward and clunky; causing me to recoil because of how out of place it felt. Thankfully it doesn’t dominate the films entire script, but it is still ever present.

But the film had many strengths and undoubtedly the main strength is its protagonist, Tommy Akhtar. His life; his story; the things that have built him in to who he is and now the work that he does is what makes watching this film so engaging.

Simply as an individual, Tommy is someone who intrigues you. He is involved in work that comes with interesting situations and people, and he does it all from the shadows of London. Darkened street corners where he is illuminated by the fluorescent light of an off-licence, watching a drug deal going down but not intervening because that’s not his job; he wasn’t payed to stop petty street crime. At times the film has a modern-day noir feeling to it – voiceover and all. It all has a mysteriousness to it; it makes you want to learn more about him and his world.

And thankfully, the film gives us Tommy’s story and what his world is like in droves. So much so that Tommy and his troubled life becomes the most compelling part of the whole film. That primary plot that I was talking about not being very original; well the thing that helps stop it from sliding into the mundane is that Tommy’s own personal life and also history begin to feed into it – layering the two really well within one another.

Because of how interested you are in Tommy and because of the connection that you soon form with him over the course of the film, you are able to invest yourself in everything much easier. Having things become more personal; having the entire story build into something that directly affects Tommy and his life, makes the film so much more than just a basic cop drama. You care about him and you care about the people around him that mean something to him.

Which is a further strength of the film: it builds out a supporting cast of characters who feel developed enough and who play a part in one way or another. From Tommy’s father, to old flames from his past, to the cheeky teenager from the street corner – City of Tiny Lights makes the effort to build out these people and give them their place within the overall story, which of course plays out later as things escalate in severity.

And I think the final point concerning the importance of Tommy in the entire film, which I want to touch upon, is his past and the value that it adds to his character development and of course the story itself. The film takes the time to slowly insert moments from Tommy’s past and it is in these moments – which at times bleed into his present – that help to build out his story and who he is. They play a crucial part in building the film into something more and they help play a part in the evolution of him – not only for Tommy’s past self but also his present.

Elements like this are why I liked this film so much. I’m a character man; you give me a well handled and explored character(s) and you’re going to have me in the palm of your hands. This film gave me that – in both Tommy and some of the supporting characters – and because of that I was fully engaged and following along at all times. Yes the basic plot was predictable, but it didn’t let that hold it back, it instead took that basic plot and built upon it; adding more. And that more was what I cared about the most.

So I will be recommending City of Tiny Lights. In no way is this film a game-changer, but it doesn’t matter, because what it does is push past some of its limitations to produce something that is propelled by people who matter and you care about. So if you find the time, this film is certainly worth checking out.

So do you think you’ll go to see ‘City of Tiny Lights? What did you think of my review? Let me know any and all thoughts/feedback in the comments down below. If you’re interested, you can follow my blog directly, or you can follow me over on Twitter – @GavinsRamblings. That way you’ll always know when I post something new. Thank you so much for taking the time to read my review and I hope you have a swell day.