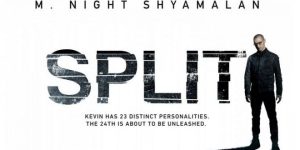 Split, written and directed by M. Night Shyamalan, is a film that completely wastes all the interesting opportunities that is has. I really thought this might be the one, the one that would put, Shyamalan back on the radar (in terms of deserved attention) but oh… it really isn’t. So many of the failings that have become a staple of his filmmaking are back and rearing their ugly head – and this time he also added a few new ones. This is going to be one of those reviews where I just sigh to myself – he had something good with this one, and he went a squandered it. So let us begin the fuller review, and see just where this film goes wrong.

The story revolves around 3 teenage girls, Casey Cooke – played by Anya Taylor-Joy – Claire Benoit – played by Haley Lu Richardson – and Marcia – played by Jessica Sula – getting abducted by, Kevin – played by James McAvoy – a man who has 23 known different identities within him. The character is able to instantaneously transfer from one identity to the next, each with their own particular characteristics and tics. It is unclear why the girls have been taken, but what they do know is that whatever fate awaits them, it is not one that will see their safety or freedoms remain intact.

The concept that fuels this film is one that I found really interesting. An antagonist with 23 different identities that then commits a serious crime. Split even explores this interesting idea quite well in the beginning; offering up ideas that really get you thinking about such a thing. Unfortunately the film just doesn’t really know how to properly explore and expand on such a rich idea.

I for example was fascinated by the idea that there were 23 separate identities within this one man, and that like any large group of people, some got along, while others couldn’t stand each other. The film hints at such a thing; we get fleeting examples that there are revolts going on within the body of Kevin. Some of them have certain beliefs, beliefs that they want to see come to fruition, while others think them to be silly and try to stop them from carrying out the tasks necessary to fulfil those beliefs. This was something that I think could be a whole film in itself.

But in terms of characters, the most egregious thing the film does, is with its handling of, Casey Cooke (Anya Taylor-Joy). The character has a deeply troubled past, one that has seen her sexually assaulted by her uncle, from a very young age. It is something that makes you feel sick and repulsed. But in the confines of this film, it is used as nothing more than a cheap plot device; something that can be used to help fight back against the antagonist. I found it really distasteful and also troubling that the film would take something so serious, and then just use it as a throw away point in the plot, that way it could have its resolution make sense. I am amazed it was ever thought that it was a good idea to have it play a part in the film, as the handling of it, is distressing to say the least.

It then also makes things stranger when I consider this films attempt at a consistent tone. Split doesn’t seem to know whether it wants to be an intense thriller that touches upon some serious subjects or a light humoured film with bizarre comical cuts and a character who is completely out-of-place in relation to the rest of the film. One moment the audience around me would be cracking up and having a good ol’ giggle and the next moment there would be this uncomfortable silence throughout the cinema, as people seemed unsure of how to react to the thing they were seeing.

I mean, this isn’t anything new for, Shyamalan’s work, as there have been quite a few of his films were its been a struggle to discern just what type of film he’s trying to present. ‘The Happening’ was supposed to be a serious environmental film that had a very blatant message, yet I can’t watch that film without laughing in hysterics. ‘The Visit’ is supposed to be an unsettling horror film, but I still found myself chuckling once or twice throughout it (though I did end up enjoying that film). The most frustrating thing about it all is I still don’t know if, Shyamalan is in on the joke or not – it seems like he is (sometimes) but I’m just not sure.

I went into this film hopeful, I had heard some positive rumblings before seeing the film and I was hopeful that he might have finally pulled it together. That is not the case. Yes, this is perhaps the best technically done Shyamalan film in sometime (despite a few odd camera angles and edits) and McAvoy certainly brings his all to the role. But for me, there are just too many glaring issues – issues that totally harm the film for me. Oh… also, the twist in this film (No Spoilers of course) is so BAD, that I laughed out loud as I dropped my head into my hands. I can’t really believe that it is a thing, but MY GOD, it is hilariously BAD.

I can’t recommend Split. I can’t at any point tell someone that this is a film they should check out, or give a chance – I just can’t. Please! Just pass this by, and don’t give it the attention it is so undeservedly getting!

So what did you think of Split? Did you like it? Let me know in the comments down below. Fancy being kept up-to-date on when I post a new review? May I suggest either following my blog directly, or by following me over on Twitter – @GavinsRamblings. Thank you for reading my work and I hope you will return.