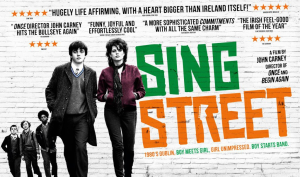 Sing Street, directed by John Carney; a film that is genuinely funny, and genuinely uplifting. Despite the film lapsing into some of the tropes that usually come along with a film like this, I still found myself smiling throughout, and bobbing my head along to the catchy tunes. This is a film with some wonderful elements, but also some glaring issues; so a review will be the best thing for me to clear some of those things up – so without further-a-due.

The story in the film sees, Conor – played by Ferdia Walsh-Peelo – going through some family struggles; Ireland in the 80’s is not in the best economical state, and thus his dissolving family needs to send him to a cheaper school. It is there that he sees the most beautiful girl, Raphina – played by Lucy Boynton. Conor does what every rational 15-year-old boys thinks to do… he decides to put a band together; with the hopes of wooing her. Complications of course ensue along the way, and Conor’s hope of nabbing, Raphina looks to be in trouble.

The part of, Sing Street that I want to touch upon first, is the part that gave me the most amount of trouble in the film. This is a film that more than once, falls into the tropes that are often apparent in films like this. Awkward nerdy kid attending a new school, falling for the pretty (unattainable) girl, problems at home etc. the well goes deeper, and also goes beyond just story beats or characteristics of the protagonist. I more than once found myself knowing exactly the type of situation that the character was walking into and how it would play out. But here’s the weird thing: it never once ruined my time with, Sing Street. I never rolled my eyes in annoyance, nor did I ever feel bored by the stereotypical path in which the film was taking. The reason for that: the film does the perfect amount to make its self-feel fresher and more approachable than other films ever do.

The main character in the film is a perfect example of this. Conor (Ferdia Walsh-Peelo) is a dorky kid who’s attending a new school that has not so pleasant tendencies running throughout it. But Conor never felt like a character who didn’t speak for himself; he never felt like someone who let the world walk over him, and whom could never get a leg up. He approaches the girl of his dreams almost immediately, and then begins scheming out a way that will hopefully result in him attaining the affection of said beautiful girl. I liked the place that Conor started; yes he was bruised and beat up by the general world – but so were many other people – it least Conor had a little wit to his interactions with bullies or no-nonsense teachers. But even better than how he begins, is the journey he then takes; not only as an individual, but also within the dynamic of the band and the effect that music has upon them all.

But the biggest factor in effecting the path in which Conor takes is Raphina (Lucy Boynton). As a person, Raphina is clearly someone who is hiding some struggles, but at the forefront is an exciting and slightly mysterious person, one who, Conor can’t help be tantalised by. While I had a pretty decent guess as to the struggles that propelled, Raphina to be the person she was, I was still completely invested in seeing her story play-out. A lot of that is thanks to the great performance by Lucy Boynton; in fact both her performance and Ferdia Walsh-Peelo’s performance work wonderfully within the context of the film and also between the two actors. They play off each other really well, and have an endearing and honest relationship. The two really are the front and centre, commanders of the film, and their entwining story always helps to keep the film moving, and keep you engaged with its proceedings.

However, what I would have liked is for some of the other characters in the film to be given the slightest hint of development. Pretty much no other character in the band is given any meaningful expansion, other than that they play an instrument. I feel the film would have really benefited from giving just the slightest hint of development for the characters. Instead they end up just fading into the background and offer up nothing of real substance. It’s a shame because what little we do get, suggests some really interesting and fun individuals to get to know. The one positive that can be gained is that the performances by all the young actors are great, and they never miss the chance to nail a joke.

Speaking of jokes: Sing Street is, much to my surprise, extremely funny; there were quite a few times where I actually did as all the kids say, and laughed out loud – that’s right, I lol’ed ladies and gentlemen. The best part about the humour in the film is that it’s well written jokes that always hit their mark. It’s also humour that feels targeted towards the time in which the film takes place, and not pandering attempts to get an easy laugh. Having those jokes there is also welcome, as the film does also drift into the more emotionally charged of moments –so to have that buffer of some genuine laughter, helps to offset some of the tougher scenes.

I can’t finish up this review without giving a little love to the absolutely fantastic soundtrack in the film. Sing Street is bountiful in its music options; ‘Duran Duran’, ‘The Cure’, ‘Spandau Ballet’, ‘Hall & Oates, and so many more. Not only is the music eclectic and head-bobbingly good, but it also interestingly plays into the structure of the film; as Conor develops in his music tastes, so does his appearance and his outlook on the world. It’s subtle in how it’s done, but once you notice it, you can’t help but see it.

Here’s the thing about Sing Street, and more specifically my review: a lot of my complaints about the film have honestly been quite nit-picky. Yes, these issues were apparent to me when watching the film, but what they never ever did was get in the way of me wholeheartedly enjoying this film. I laughed a lot; I smiled for large portions of the film, and I also got a little twinge of emotion running through my heart every once and awhile, as well. Sing Street is just such a joy of a film to watch – it doesn’t overload you with its more heavy of moments and it doesn’t dissolve into tedious attempts at comedy. The film finds a nice balance, and just simply delivers something that leaves you with a good feeling at the end of it.

So with all that’s being said, I’m going to happily recommend, Sing Street. This is a film that’ll inject some good feeling throughout you, and leave you more than satisfied with your decision to watch it – enjoy.

What are your thoughts on, Sing Street? Let me know in the comments down below. If you’re feeling kind, perhaps you’d like to follow my blog directly, or shoot me a wee follow over on Twitter – @GavinsTurtle(handy link for ya there). Thank you anyway, for taking the time to read my ramblings; it truly does mean so much to me that you did!