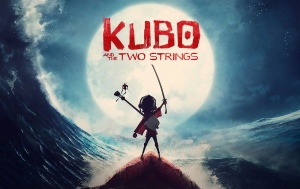 Kubo and the Two Strings, directed by Travis Knight, is a film with such originality and style. From the very first frame of this film, I was instantly in love with how it looked and the direction in which it was taking. While the film never surprised me (from a plot standpoint) I don’t think there was ever a time where I wasn’t completely engaged and in love with the world that Kubo travels through. So let’s get into this review and see what works and what doesn’t.

The story follows Kubo – voiced by Art Parkinson – a young boy with magical abilities. Kubo takes care of his sick mother who only becomes cognoscente once the moon has risen. It is during this time that she tells him tales of his father and also warns him of the dangers that hunt for him. Things of course take a turn in Kubo’s life, and with the help of a monkey – voiced by Charlize Theron – and a Samurai that has been turned into a giant beetle – voiced by Mathew McConaughey – the three set out to locate the magical armour once worn by Kubo’s father and use it to defeat the threat that has hunted him since he was born.

Kubo and the Two Strings is an absolutely beautiful film; perhaps my favourite looking film of the year, so far. Utilising both stop-motion animation and digital effects; Kubo is a film that just never gets old to look at. Not only is the animation beautiful, but the world that the film inhabits is also a treat to look at. There are so many diverse looking places that the film takes us too, and all of them are so different. I mean there’s a moment where our three main protagonists are traveling the rough sea, on a boat made out of dead leaves and broken pieces of wood, all while simultaneously fighting a creepy looking water monster and a powerful witch-like foe. If that’s not a crazy sounding set of events, then I don’t know what is?

But the film doesn’t only utilise its looks to attract you in; one of the most important aspects to the entire structure of the film is music. Kubo has a guitar that he plays and aides him in creating his magical creations. This of course results in quite a few occasions where beautiful songs fill the many moments of the film and go towards enhancing the already sense-filled experience that the film has.

All of that together – the animation, the look of the world and music; come together to form a film that is just never once stale to look at or experience. There is such creativity to it all, there is such an originality and joy to it all – this film was such a smile inducing watch, (apart from the more heart-wrenching of moments of course). I mean I could easily stop this review now and tell you to get out there and experience the film for yourself… but, there’s a little more to be said and I feel it’s important that I do.

So pivoting over to the elements that are not based on your senses, I want to talk about the story and the structure of the film, as it was slightly troublesome for me. Story-wise: I really enjoyed the story in Kubo; it took me on this really fun adventure with these interesting characters – however it was never a story that surprised me, or caught me off guard with its twists and turns. And structurally the film, when boiled down to its most basic of story beats, follows a pretty simple structure, one that has been seen before. So while I was completely invested in seeing Kubo and his party of companions succeed, I was never in the mind-set of worrying about how it would all turn out; I comfortably knew the way in which things would unfold, and was never left sideswiped by any of the developments in the film. Now that’s maybe because I’ve seen a lot of films and I usually have a decent sense of where things are leading (particularly with animation films which never really stray too far from a basic plot structure). But I do again want to stress that my knowing of where things were likely to lead didn’t ruin my time with the film; I still enjoyed the journey of the characters and there developing bond, and it’s hard to become passive with a film like this and with how it presents itself.

I also want to stress that from a creative standpoint, ‘Kubo and the Two Strings’ has an emotionally engaging story. The love between a mother and her son drives this film, and I certainly found myself getting choked up once or twice. While the story is predictable from a top down view, that in no way detracts from the poignancy of the scenes in the film. And of course one of the main things that helps drive that poignant story is its characters. I was fully on the Kubo train from the beginning. He is a boy who has it rough, yet the film never plays on that, it instead uses it as a way to reinforce him. In fact the film itself doesn’t play on the easy to milk characteristics of the characters. While it doesn’t shy away from them it also doesn’t make them the soul focus. It does this wonderful thing called: development. Characters feel like people who have lived their own lives and that helps to build the world of this film; it’s meaningful and it’s relatable.

The last point I want to touch upon is something that I was not expecting when I sat down to watch ‘Kubo and the Two Strings’: and that was some brilliantly done action sequences. Kubo offers up action set-pieces that are more enjoyable to watch than some blockbuster action films do. Now I’m not saying they’re on the same scale as the bigger films, but they’re certainly much more coherent and thought out. When two characters would collide with their weapons, I could not only see it, but I knew who was who and where geographically within the scene they both were. Blending the stop-motion and the digital effects, ‘Kubo and the Two Strings’ offers up some really exciting moments to watch; moments that have weight to them and also some feeling to them – it’s an achievement for sure.

I had heard quite a bit of buzz about this film before going to see it, but I had not seen any promotional material, thus I was unsure what I was walking into. What I do know now is that I came away from this film completely in love with almost everything it had to offer. It’s one of those smaller films that isn’t immediately on your radar, but quickly should be.

There isn’t a doubt in my mind; I am recommending ‘Kubo and the Two Strings’. What an absolute treat this film is, one that had me fully engrossed from beginning to end.

.I’d love to hear what you thought of ‘Kubo and the Two Strings’, or this review. Feel free to leave any thoughts in the comments down below. If you liked what you read and you’re interested in reading more of my ramblings, may I suggest either following this blog directly, or following me over on Twitter – @GavinsTurtle. Whether this is your first time reading my writing or you’ve returned to check out some more, I wholly thank you for doing so, it truly means a lot!

One thought on “Review – Kubo and the Two Strings”