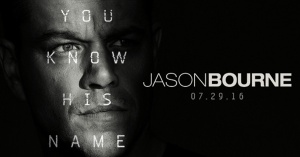 Jason Bourne, directed by Paul Greengrass, is a film with the unrelenting momentum that is now a staple of Greengrass’s style. But this is a film that also comes encumbered with the problems that plague most of his films. There’s quite a bit to breakdown and analyse about this film, and a lot of it isn’t on the positive side. So let’s get this “autopsy” underway.

The Story this time round sees the return of Jason Bourne – played by Matt Damon – as he is dragged back into the world of henchman punching and techno-talk by Nicky Parsons – played by Julia Stiles. As you can imagine; certain areas of the American government aren’t happy to see him re-surface and possibly bring down another of their secret organisations. So it falls to Heather Lee – played by Alicia Vikander – who under the tutelage of CIA Director Robert Dewy – played by Tommy Lee Jones – must try to eliminate the threat of Bourne, and keep the shady antics of the CIA rolling.

So as I said in the beginning: Jason Bourne is a film that has such momentum to it. Much like ‘The Bourne Supremacy’ and ‘The Bourne Ultimatum’ (the Bourne films that director Paul Greengrass directed) this film is constantly moving. Now that movement is something that dominates many aspects of this film; whether it be the globe-trotting, the action within a scene or the style in which it is shot – ‘Jason Bourne’ as a film, keeps you constantly on the move, never settling or letting things become stable. Greengrass is a master at keeping the momentum of a scene going. He can have a chase sequence go on for far longer than what is considered the norm, and what is incredible about it is how well it flows and all feels interconnected.

This Bourne film continues that ability that Greengrass has – however, a multitude of elements diminish the quality and the achievement of these scenes. So I’m going to lead into what those failings are by talking about the first big action sequence and how it ultimately doesn’t work. The sequence is one that goes from a foot chase within a violent protest, to a car/motorbike chase and all of it is of course backed up with the usual assortment of fights, shooting and getaways that happen just in the Knick of time.

This scene goes on for some time, and as I pointed out: has this seemingly effortless movement and continuity to it all. But here’s the problem: Paul Greengrass maps out and constructs absolutely exhilarating action sequences and then chooses to never actually show the audience. What I mean by that, is that his decision to rely so heavily on shooting the film with a handheld camera set-up, results in scenes upon scenes where you can’t distinguish properly what is happening. The camera is either so deep in the mix of the action that you can’t tell what you are looking at, or it is shaking around so much; you have no real sense of where everything is in relation to one another.

A lot of the film is then also ruined by the editing choices. There are three examples that stand-out to me, that I feel highlight this. The first one is the scene that has now been seen time and time again in the trailer – the one where Bourne one-punches a man in an organised fight. The strange part about this scene is that in the trailer, it is shot at a wide-angle, so you can clearly see what has happened, but in the final-cut of the film it is done in a jarring close-up and it is edited in a way that means you can’t really tell what Borne just did. Why they chose to do this… I have no idea.

The other scene that shows the problem with the editing is a pretty simple scene: the antagonist of the film simply has to climb over a wall – for some reason though, they showed this simple climb by having four… yes FOUR separate cuts in this miniscule and largely irrelevant scene. There is so much jarring movement in this one moment where a man is simply ascending a wall. I want to say it again: FOUR cuts in a moment that perhaps lasts less than 5-6 seconds.

The last scene I want to highlight when talking about the mess that is this film is the final showdown between Bourne and the bad-guy that you know he’d inevitably end up fighting – simply named Asset. The entire fight is done in close-up handheld madness. You cannot tell who is hitting who, which of the two is prevailing and all impact is completely missing from a fight that you don’t even really care about. When it finally came time for the finishing blow, I had completely checked-out.

What is a Bourne film without well-constructed action? Well it’s this film. Unlike the previous films (barring ‘Bourne Legacy; a non-film in my opinion) this Bourne film completely fails to engage you with its more lively moments. Each time Bourne had a foe to overcome, I settled in for what was going to be an incomprehensible, uninteresting bore-athon. There was nothing clever about the fights (Bourne using a magazine or a Bic-pen as a weapon for example) and there was nothing exciting about the obstacles that he came up against. The film is utterly bland in its execution of an element that is so crucial to its success… the action.

I feel that last point aptly leads into the other issue with ‘Jason Bourne’. It is a problem that actually resides within those terribly shot scenes: the story. This film follows the exact same structure that the 4 previous films have. Bourne resurfaces; shady government organisation wants to take him down; wave upon wave of nobody henchman are eliminated by Bourne and then in the end Bourne kills the overseer of it all and walks away into the distance while a ‘Moby’ song plays. But here’s what the original trilogy had that this one doesn’t: a compelling reason to care about Bourne’s journey and an interesting enough plot involving shady government programmes (Treadstone, Blackbriar).

In this film, we are given a forced and heavy-handed plot involving Bourne’s dad; a plot that feels like it comes completely out of nowhere and shows that they just cobbled together anything so that they could have a reason to bring back the title character. While that’s all going on there is also a b-plot involving a tech company and its deceitful involvement with the CIA. I cared so little about this story, and it played so little in the overall film, that I have no interest in talking any further about it.

The original Bourne trilogy had purpose to it, it had motivation for its main character and you wanted to see where this seemingly impossible endeavour would lead him. It was also all wrapped up in some uniquely enjoyable action. This film has none of that what-so-ever.

What else does it not have? Actors who cared to make an attempt with their performances, and characters who felt like actual compelling people; ones you’d be interested in investing 2 hours in. The stand-out failing in the film is Alicia Vikander (Heather Lee) who delivers a one tone performance of a character who is seemingly lifeless. The film fails to set her character up, which results in a total lack of investment or intrigue, and I guess Vikander realised how paper-thin the character was, and so decided to not really show up on-screen. It is a surprising let down from a brilliant actress.

Then you have Tommy Lee Jones, who is a man who seems to have given up on delivering any sort of meaningful performance – but he (like Alicia Vikander) is also given nothing to work with, so maybe he also chose to just check-out on caring.

The only reliable actor in the film is Matt Damon. He has of course had plenty of time to define this character, and so in this film he’s the only person who feels real. Damon has perfected all the nuances of the character, and returns to continue with the character that he so excellently defined; it’s a shame that the rest of the film completely lets him down.

This is a film with an overflow of problems. So many differing aspects played into forming what is a mess of a film; one that really didn’t need to exist. The Jason Bourne trilogy was a greatly packaged story, and it’s time to move on from the character and his story… just let it be.

I will not be recommending ‘Jason Bourne’. An unnecessary film that adds nothing new to a franchise that had accomplished all it needed/was going too. Very much pass on this one.

What are your thoughts on this new Bourne film? Let me know in the comments down below. If you’re interested in keeping up-to-date on my other ramblings, may I recommend either following this blog directly, or following me over on Twitter – @GavinsTurtle. As always, thank you so much for taking the time to read my work, I appreciate it wholeheartedly!