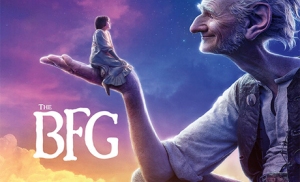 The BFG, directed by Steven Spielberg, is a pleasant film, a film that doesn’t step beyond its expectations. I perhaps thought more of this film – partly because of it being directed by Steven Spielberg – but what you’ll get is a film that is pretty run of the mill. I was never surprised by what ‘The BFG’ offered, but I was certainly enchanted by its content. There are certainly some interesting elements to breakdown and so I might as well get this review underway.

The story in, ‘The BFG’ follows, Sophie – played by Ruby Barnhill – who is taken from an orphanage by, The Big Friendly Giant – played by Mark Rylance – and brought to Giant Country, where she learns that there is much more to the word than she actually knows. Sophie is of course not safe in this new place, as other larger giants (who eat children) also roam wild. Both Sophie and the BFG will learn the wonders of one another’s worlds, and form an everlasting friendship.

I’m of two minds when it comes to ‘The BFG’. On one hand I had a nice time watching the film; it was sweet and funny. But on the other hand I was at all times disconnected from the film. Why was I disconnected? Well it actually stems from an issue that I talked about in my review for the most recent ‘Jungle Book’ film (you can click the link here, if you’d like to read that). The attempt at blending real actors with completely CGI environments and other characters who are also completely CGI is something I can never really connect with. I always see the seam between real-life and computer generated life. The BFG relies heavily on CGI – it has too and I don’t blame it for needing to – it’s just for me as someone who has been watching films for a long time, a factor that hinders my ability to fully invest in the overall experience.

But that’s not to say that the visuals in this film are in any way bad… they aren’t. There are actually some truly beautiful moments in this film; a great example being the location in which the BFG captures dreams. It is a layered location, filled with light, life and joyfulness. Yes, it is all computer generated, but that doesn’t take away from it catching your eye. I also enjoyed the smaller details that made up the environments; the BFG’s house being a prime example; an old spitfire wing repurposed as a bench, an old pirate ship that now served as a bed for the BFG. The film is filled interesting things to observe (if you take the time to look). I enjoyed scanning the scenes for all sorts of objects/details, as it seemed the team who worked on the effects, took great joy in hiding them around the environments.

The effects that are used to create the BFG are also remarkable. Utilising motion capture to implement Mark Rylance’s face and his performance, definitely adds life to the character. It results in a wonderful performance by Mr Rylance. What also aids his performance is the writing of the character; the almost childlike way in which he approaches words is something that never tires in the film. There is certainly a lot of effort by everyone involved, to bring the character to life, and I think they succeed at it.

Where I did have issue, were the other giants in the film. There is clearly much less effort put into making them feel part of the world. What this weirdly does, is make a film that I’m already struggling to connect with, have another disconnecting factor within the disconnect (if that makes sense). The BFG doesn’t feel like he matches up with the other giants in the film, they all feel very much like CGI creatures, where as he feels like a more realised person.

You then also have in the mix of it all, Sophie (Ruby Barnhill) who is one of the few real-life actors in the film. The coupling of Sophie, the BGF and the other giants just didn’t work for me. But either on her own or with the BFG, Sophie is a spirited little girl; the sass and the head-strong nature of the character is refreshing and fun. It doesn’t take much for this character to feel expansive.

There is a lot that is endearing in this film; from the characters, to the world, to the simple fun of it all. But I do feel that the film slightly overstays its welcome. Closing in on close to 2 hours, the film begins to drag slightly in the final act. This is made slightly worse by a scene that involves the BFG meeting the Queen at Buckingham Palace. The scene starts off fun, but quickly becomes too long and a little tedious. There is definitely some fat that could have been trimmed off of this film, and I think it overall would have helped with the pacing and the overall experience.

The last point I want to touch on is that this is a Steven Spielberg film. I knew that going in and was reminded of it once the credits rolled, but during watching the film, I never got the sense that I was watching a STEVEN SPIELBERG film. This is one of the biggest directors out there, and I never once felt the magic or the depth, that comes with watching one of his films. The BFG is pretty light on content, and in no way feels more than it is. Perhaps it is unfair for me to put such expectations on seeing a Spielberg film – for me though, the magic was missing.

There isn’t really much else to say; the BFG is a harmless fun film. It doesn’t really offer much in the way of anything but it is an enjoyable watch, one that’ll pass the time and not distress you or cause you to over-think its intricacies (mainly because there aren’t any).

I’ll recommend The BFG, mainly because it isn’t a film that fails at what it tries to do. It’s not one that I’d rush out to see, but if you do end up seeing it, I’m sure you will have a pleasant time watching it.

What are your thoughts on ‘The BFG’? Leave them in the comments down below. If you’re interested in keeping up-to-date on my other ramblings, feel free to either follow this blog directly, or follow me over on Twitter – @GavinsTurtle. If you made it this far, thank you for taking the time to read this, your time is really appreciated… again, thank you.