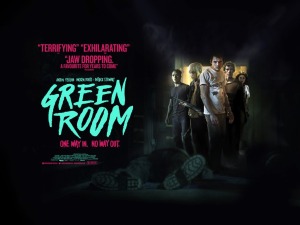 Green Room, written and directed by Jeremy Saulnier, is a completely dominating experience. The word that embodies this film is tension; this film will have you utterly uncomfortable and never wanting to look away. I at times was horrified by the images on the screen, and still never wanted to avert my attention away from a film that pulls you in and holds you there. There are some interesting things to talk about, so let’s get this review underway.

The story in Green Room sees a band of 4 young punk rockers walk into the wrong bar. This is a bar owned, run by, and for Neo-Nazi’s. Yep, this is not a safe or welcoming place. But after the band walk in on the aftermath of a murder, they must fight for survival, as an alarming number of unrelenting Neo-Nazi’s attempt to kill them all and stage it to look like the band is responsible.

I don’t mean this lightly when I say Green Room might be one of the most intense films I have ever sat through. In the beginning there’s a little breathing room, but once things take a (massive) turn for the worse, I never once think I got comfortable when watching the events of the film. I was in a constant state of unease. What that telegraphed to me immediately is the achievement that this film pulls off when it comes to keeping that feeling of unease going. It’s not an easy thing to do and a lot of films won’t even try to do it. But Green Room is a film that not only does it, but completely and utterly succeeds at it.

This is also a film that doesn’t shy away from going all in on the violence and the gore – the massive ‘18’ rating and the warning of “Intense Violence and Gore” also set you up for that. I haven’t been in a showing of a film where people audibly gasp/groan from the upsetting scenes that are happening on-screen, in quite some time (excluding horror films with a cheap amount of jump scares of course). There was even one point when a man sitting behind me audibly exclaimed, “Jesus Christ!” Now usually I’d be annoyed if someone did that, but in the context of what was happening in the film, it actually added to the experience. Here was a natural response to something that was genuinely unsettling. I mean I even found myself recoiling once or twice from the imagery on-screen. But here’s the weird thing (and maybe this is a comment on me, I don’t know) I couldn’t look away, I didn’t want too. This film is wholly engrossing.

Green Room is so much about the experience and the circumstances that the characters find themselves in. Which means this is a film that isn’t going to give you deep, methodical backstories on its characters. Nor does it need too. This is a film that’s all about being in the moment; this is a messed up situation and so everything else goes out the window, because there is some scary reality on the other side of the door and no one has time to tell quirky stories about when they all met and decided to start a band.

What’s perhaps the most interesting thing that Green Room does, is offer up characters which at first are not that likeable. They’re an edgy punk band who thinks social media takes away from the meaning of the music… they’re douchebags. But you know what’s worse than a bunch of teenagers who think they’re an edgy punk band? Neo-Nazi’s who want to violently kill you and frame you for murder. When it comes down to it, it doesn’t matter who our main characters are exactly. What matters it sacking up and investing yourself in a group of characters who find themselves in a situation that is out of their control. Also while rooting for them, you also get to watch one of Patrick Stewarts most frightening and sadistic characters that he has ever portrayed. It’s one you’ll remember for quite some time.

I didn’t know what to expect from Green Room, but I certainly didn’t think that I would find my new front-runner for favourite film of the year. I could probably go on and on about the overwhelming experience this film was, but there’s no need too. Instead, what you absolutely must do is see this film.

So I guess I’ve let the cat out of the bag with that last sentence, but yes, I am definitely recommending Green Room. Not for some time has a film so totally dominated my attention while also unsettling me. I loved it all and can’t wait to see what colour, director Jeremy Saulnier bathes his next film in.

I’d love to hear your thoughts on Green Room, so please leave them in the comments down below. If you’d like to keep up-to-date on my other ramblings; feel free to follow this blog directly or follow me over on Twitter – @GavinsTurtle (click that link to be taken straight to it). Last but never least, have a great week and I hope you enjoy some good cinema.

One thought on “Review – Green Room”