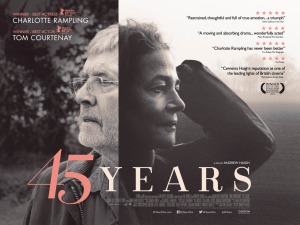 45 Years, written and directed by Andrew Haigh is a film that doesn’t overstate its presence. In the place of big, cumbersome story telling or characters that are complicated to ever feel real – 45 Years is a film that delivers something small and meaningful. Though this film won’t appeal to all (a rip-roaring event this film is not) it is still a film that leaves an impression and intrigue once the credits roll.

The story in 45 Years follows a married couple – Kate and Geoff Mercer, played by Charlotte Rampling and Tom Courtenay, who are on the cusp of celebrating their 45th wedding anniversary. However tragic, yet revealing news from the past (before they had even met) surfaces and it causes a rift to slowly develop. The revelations that over the time are uncovered may completely change the dynamic and the storied history of their entire time together.

The thing that was most wonderful about this little film was the believability, the realism that it presents. This film effortlessly puts across the length and the history of the Mercer’s. A few simple scenes and an environment that looks lived in made this a film that I instantly felt knowledgeable and comfortable with. That feeling makes it so easy to settle in to the film and begin to learn just who these people are, what their everyday lives are like and what are the little idiosyncrasies that have naturally been adopted by them both. It’s smart, yet so simple and it’s that feeling of familiarity that makes you so quickly want to settle in and watch.

Why it’s also so clever is that when the problems do start to surface and their happy, familiar world starts to crumble, you are right there wanting to follow along and understand just exactly what is happening. It’s the kind of story telling that settles you in, puts your feet up and makes you feel comfortable in its world, and then when that complication does occur you feel ready to almost tackle it with them.

What I think also aides the films is the realism in its dialogue. Writer and director Andrew Haigh has dialogue that feel like real conversations. The characters talk about their day, they make little jokey references to things that are memorable moments in their lives and then when it does come to the characters having to get real with one another and drill down into what is really bothering them, it all comes off like these are actually two people who truly understand one another and know exactly how the other is feeling. It’s with this type of writing that 45 Years is a film that feels so much like the reality of life. People can easily understand how the characters are feeling and even without fully knowing them, they can begin to become invested in their very unique and personal problems.

Both the story telling and the writing are then given to two actors who themselves just feel real within the film. There felt like a genuine connection between the two and whether they were struggling through a tough conversation or just sitting in the living room in silence, there is always a sense that these two have known each other for 45 years and these characters are as real, as real can be.

I keep saying the word simple but it amply describes the through line of this film. 45 Years doesn’t have a long winding story with multiple layers to follow along and understand, nor is it over-filled with characters that don’t all need to be there. This is a film that just has its little story to tell, and tell it well it does. Not that there is anything wrong with the bigger more complicated films – in fact there are scenes in 45 Years where it does feel like they’re padding it out a little bit, hoping to cross the 90 minute mark. Sometimes though, it’s just nice to sit down and watch something small in scale and scope and then have it achieve it so well.

There’s not much else to say on 45 Years other than that it’s just a lovely little film that presents something different and engaging, and while it’s not going to change the face of filmmaking, it is still a film that leaves a little mark in your memory – it’s sad, it’s sweet and in the end has a very human story at its core.

So with that I will be recommending 45 Years. Not a film you may ever come back too but it is still a film that is worth going to once.

So do you have any interest in seeing 45 Years? Let me know in the comments down below. If you want to keep up to date on my other reviews you can either follow this blog directly or you can follow me on Twitter – @GavinsTurtle. Either works and both are appreciated. All that’s left to say is have a good week and thanks for taking the time to read this.