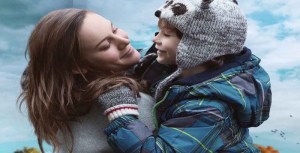 Room, directed by Lenny Abrahamson is a touching little film pulls you in to a small little word and slowly lets you witness it expand through the eyes of a 5 year old boy. Keeping you safe and removed from the unsettling realities of life – Room is a film that tugs at your heart strings and makes you aware of the wonders of the world.

We follow the story of Joy (Ma), played by Brie Larson who has been kept against her will in a shed for almost 7 years. In there with her is her 5 year old son Jack, played by Jacob Tremblay, who has never been outside of what they know as “Room”. He does not understand what is beyond the 4 walls that surround them and now he has to prepare to leave the room and learn that there is a whole new and stimulating word out there. How both of them deal with such a dramatic change will not be easy but necessary it is.

Room was a film that pulled me in and made me a part of its tiny little world. Starting off in room with Ma and Jack, and then spending so much time with them in there becomes an involving experience. I learned their routines, I sow they coped with the lack of space in Room. It was an experience of adapting, understanding and acclimating. It’s so clever the film brings you in and makes the attempt to help you understand just what it is like for the characters in there.

What also helps in bringing you down to the level of the characters is that the film mainly gives the perspective of Jack and what it’s like for him in Room. We see and learn how Jack perceives Room and how he perceives things outside of it. This involvement pulled me in and made me a part of it all and it was intriguing, educational, but mostly heart breaking.

The young actor playing Jack is Jacob Tremblay who delivers one the sweetest and most heart wrenching performances by an actor of his age. Almost Every line of dialogue was delivered with such quizzical honesty, and the way in which the character would look at things and question them is something that only heightens the taking things for granted experience that many audience members will undoubtedly feel. Jack has that child innocence coursing through him, and so seeing him slowly try to understand new things is wonderful, yet sad.

Alongside the young actor/character is Brie Larson who plays Ma. There is such sadness in her eyes and watching her struggle everyday with her situation is powerful. Larson brings subtlety to her emotion – the character of Ma understandably wants to hide the difficulty she is dealing with and Larson does that perfectly. Just like seeing Jack slowly engage with the new world is uplifting, seeing Ma have the strength to so what needs to be done is something potent and unforgettable.

Larson’s performance and character understandably take on a different journey in Room. She already knows of everything outside Room and while it’s special to get to watch Jack experience it for the first time, it is also sad to see Ma struggle to return to it. It’s not as easy as first thought, and seeing the way in which it invites her back is something that is certainly tough to watch. More than any other actress nominated for best performance Brie Larson goes above and beyond with hers and definitely deserves to win.

Both of these actors/characters have such an honest bond between them and it is a bond that drives this film into the emotional centre of your heart. Any point in which the characters are separated or in danger is tough to watch but getting to see the moment where they are both reunited makes it all worth it – an on screen duo that from the very beginning has connection worth watching.

Room is a film in which a sizable chunk of the beginning is in single Room and like I said you along with the characters acclimate to that space. You get use to the lack of light and the cramped conditions in which the characters live. The placement and use of the camera only heightens this. What this then means is that when the time finally comes for you along with the characters to be free from Room you begin to experience what a massive change that must be. Everything is bright and loud, things seem foreign. Just like the characters you have to get use to all of these things (that almost feel new again). The whole inclusionary experience of this film is what elevates it.

Having so much of the film come from the perspective of 5 year old Jack – including sometimes having the camera represent his visual point of view means that Room is a film that makes every attempt to help you relate and understand what it must be like. Director Lenny Abrahamson did a fantastic job of making something so unimaginably foreign feel like something you can understand and even gleam satisfaction from.

But nothing is more satisfying than watching the development of Jack. Petting a dog for the first time, making his first friend or getting to evolve the already very close relationship with his Mum – so much of Room is something that pretty much everyone will not be able to truly understand but the way in which this film does it is simply wonderful.

Room is heart breaking, Room is involving, Room is a special world that we over time get to understand and grow with the characters in.

I am of course recommending Room. This is a film that more than deserves the nominations that it is receiving and I hope as many people as possible go and experience it.

What are your thoughts on Room? Let me know in the comments down below. If you want to keep up to date on my other reviews that feel free to follow me on Twitter – @GavinsTurtle. Last but not least have a great weekend.

One thought on “Review – Room”