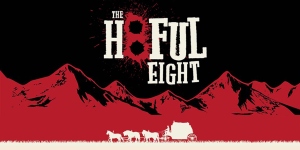 The Hateful Eight, directed by Quentin Tarantino, is a film that as always, comes filled with the rich and engrossing dialogue that is now anticipated by many a film fan (and even a general everyday viewer). But this is a Tarantino film that I feel never really reaches the same levels of joy and film lover-ship that his past ones more than have. It’s difficult to explain right now, but there just feels like there’s an element (something greater) missing from The Hateful Eight.

The story in the Hateful Eight sees bounty hunter John Ruth – played by Kurt Russell – on his way to Redrock to hand over, Daisy Domergue – played by Jennifer Jason Leigh – to the hang man. However an oncoming snowstorm stops him from reaching it and instead he, along with two passengers that are picked up along the way – Major Marquis Warren – played by Samuel L. Jackson, and soon to be Sheriff Chris Mannix – played by Walter Goggins – end up taking refuge at Minnie’s Haberdashery until the storm passes. This is where suspicion and death soon rule the night, as each of the 9 people in attendance begins to antagonise and suspect one another.

So I have to start off by diving into the high number of characters that the film boasts. Let’s just say that it’s a mixed bag when performances are concerned. Some more than meet the mark, while others never really quite make it; but this is still a Tarantino film and so the depth and intrigue that the characters themselves have is at a high – it’s just a shame that there wasn’t always the right actor to support it.

First I want to give a little love to the fact that Kurt Russell is now regularly appearing in films again. Kurt Russell, in my mind is great and has appeared in many films from my younger years that I still love now (‘The Thing’, ‘Escape from New York etc). So I was more than happy to see that he was leading a Tarantino film. So there’s no need to dance around it, he was great. His character was interesting and he more than brought the laughs with his cold hearted, yet understandable ways. Also that moustache, jealous is the only word I can think of.

As always, Samuel L. Jackson brought his A game to a Tarantino film and perhaps brought one of the most interestingly well rounded characters/performances to it as well. I always love the characters that Tarantino creates for him and I also love the fact that Jackson keeps knocking it out of the park. These two really understand one another’s rhythms and always end up producing treats for the audience.

Recognition has to now absolutely be given to Jennifer Jason Leigh who delivers the most sinister and unsettling of characters in the film. Daisy Domergue is a character that makes every other man in the cabin look like kindly older gentlemen. She is evil, yet funny and that’s all wrapped up in unpredictability. She more than deserves the nomination for best supporting actress at the Oscars, and if I were to ever meet a person like Daisy Domergue in life… well it’s safe to say that I don’t ever want to be in that situation.

Finally before I move onto lumping everyone else into a condensed run down I have to give some appreciation to Walter Goggins as Sheriff Chris Mannix. He is one of those actors who appears in many films and usually offers up a solid supporting role. He’s always great but he never usually bubbles to the top of a film; the background is where he usually stays (which is a shame). He more than nails it in The Hateful Eight, and as always delivers something very watchable and highly entertaining.

The rest of the cast is a collection that ranges from good to bad. Tim Roth bringing a lot of the comedy and an accent that I wasn’t on board with at first but by the end loved. It’s Michael Madsen that for me misses almost every line delivery or facial cue in the film. The man couldn’t even return a winking exchange believably. He was certainly the missed mark for me in the film. Last but not least is Bruce Dern. Dern isn’t given much to work with but he delivers something good and the old timer certainly still has it.

Now I’ve given a pretty extensive breakdown of the characters in the film but something I haven’t done yet is admit the fact that despite this wide ranging assortment of characters, I myself found the lack of connection or want to root for any of them a factor that turned me away from the overall film experience. This is a film filled with hateful people; these are the bad guys that you make the effort to avoid. In any other film we would be watching them as they were chased down by the hero and dispatched with. So this made it difficult for me to fully invest in the film. In the end I wasn’t concerned about any of these characters living or dying. I wasn’t there waving my flag of support, hoping one or two would get to walk away happily ever after. This is perhaps the main but not the only thing that pulled me away from ‘The Hateful Eight’.

Another aspect of the film that I was on board with; but over the 3 hour span of the film slowly became disinterested and frustrated by, was the plot of the film. After the film spends too much time sloppily introducing characters we finally get to the meat and potatoes of it all and I was very much in. Tarantino almost offers up his style of a murder mystery in a secluded cabin in the middle of nowhere. I loved it and I was completely enraptured by it. The always juicy and delicious dialogue of his films of course very much helped, and throw into that recipe a group of actors who knew how to deliver it brilliantly (except you Mr Madsen, you messed it up) and I was just so  happy to be sitting and watching it all play out.

However things then quickly lost their way. There was a change in gears and the film went from an engrossing murder mystery with rewardingly joyous dialogue exchanges to an unnecessary but now expected Tarantino blood bath. The reason: dialogue and attention are thrown to the side, and the film instead offers up a flashback that completely kills the momentum of the film, and then tries to make up for it by having the usual killing of everything standing and hope that the overloading of every sense within the audience will make them amenable to Tarantino’s sadistic little game. Just like ‘Inglorious Basterds’ and ‘Django Unchained’, the film abandons the glorious character interactions for bloody devastation. But in those films it felt like we as the audience had worked hard for them. We’d been there throughout those characters hard times and now we were ready to see them get what they wanted/deserved. The insane violence at the end of those films was a reward for both the character and the audience. In The Hateful Eight that isn’t the case, it didn’t feel like an outcome that was necessary, or something that any of us deserved. It happened because that seems to be what is supposed to happen at the end of a Tarantino film these days. It’s a little tiring and over done now; something new would be nice.

Now there were still many things that I loved in The Hateful Eight. It’s just that a lot of them are because of my film geekiness. The Hateful Eight is an undeniably beautiful film and boasts some of the most stunning location shots of any of Tarantino’s films. I unfortunately was not able to see the film in its intended 70mm version but I was still blown away by how good this film looked.

But the thing that jumps out the most to me in this film is its unflinching attention to detail. The Hateful Eight takes place primarily in one location and in that location there are very few places for the actors to hide. There were moments where two characters would be having a back and forth and on the edge of the frame you could still see the other characters sitting there, continuing on as them. I loved catching all the stuff that was just peeking into shots and that did make the film feel like a stage play. What was also enjoyable was when characters (spoilers) were dispatched, but for large portions of the film you would continue to see their lifeless bodies in shots. Tarantino is a director with very few boundaries or hurdles within his film making path and this means he has the free reign to pull off ambitious moves like within The Hateful Eight. Very few directors would ever be allowed to do a film like how he does, and despite the glaring issues in The Hateful Eight I still appreciate his skills as a filmmaker.

That attention to detail also makes its way into the sound design of the film. There were quite a few times during scenes in which I would notice the snow storm raging on in the background or another character who wasn’t a part of the proceedings at the time would be tinkering with something that would then bleed into the main scene and add to the realness of the situation. The addition and the continued use of sound in the film was something that certainly helped shape and expand the world within that cabin.

Speaking of sound, Tarantino did something for The Hateful Eight that he hasn’t done before. This time around his film had a score throughout it instead of a soundtrack, and now this is absolutely how Tarantino should do it going forward. The talented Ennio Morricone scored the film and is sublime. The addition of his music was wonderful and added so much more to the overall atmosphere of the film.

This is a tricky one for me because there are elements of The Hateful Eight that I loved and then there are parts that I wasn’t a fan of. I wouldn’t say I was underwhelmed by the film but it never really hit the heights that some of his previous films have. There is something lacking in The Hateful Eight and I am still unsure as to what exactly it is.

I’m going to recommend The Hateful Eight. Mainly because Quentin Tarantino films are like an event and I still believe you should experience this film in the cinema. However this is one that I don’t think will have the same resonance for people as his previous films have.

I’m really interested to know what you thought of The Hateful Eight so please feel free to leave me a comment down below. To keep up with the rest of my reviews you can follow me on Twitter – @GavinsTurtle. I hope you have a good weekend.

One thought on “Review – The Hateful Eight”