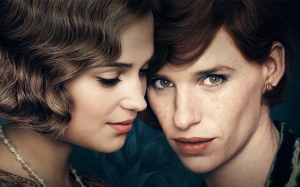 The Danish Girl, directed by Tom Hooper is an intimate film – one that slowly brings you in and makes you a part of the journey. This is wholly a character film and nothing is left out when exploring two people who are very much the same while also being worlds apart from each other.

The story of The Danish Girl follows a married couple. Gerda Wegener, played by Alicia Vikander, is the talented and loving wife to Einar Wegener/Lili Elbe, who is played by Eddie Redmayne. Einar Wegener is not all that he feels he should be – feeling as if he’s wearing a disguise both him and Gerda go on a journey together to discover just who the real Einar is… or should I say who Lili Elbe is. Stuck within in a time when being a transgender is dangerously misunderstood – Lili must fight as much as she can to be herself.

This is a film with 3 strong characters at its forefront. Eddie Redmayne takes on the challenging role of being 2 of those 3 and for the most part does it well. Where I struggled with Redmayne is that sometimes his own performance seemed to betray him. Noticeably odd reactions in scenes and eyes that at times look void. Redmayne for me was a little lost with his performance. It’s a shame because there are certainly moments in the film where he transforms and is truly playing two people at once. There would be scenes where I was glued to every second of his performance, and then others where I was taken out of the moment because something just seemed off about his slight reactions.

I do still think that Eddie Redmayne delivers something wonderful in The Danish Girl. I can’t deny how much he disappears into the role. He brings genuine heartfelt emotion to his performance and the film.

Redmayne is also helped by having a brilliant performance from Alicia Vikander. Vikander is sublime in the film – it is certainly as much her film as it is Redmayne’s. There’s a fire to her character, but not one that is impervious to the hardship of dealing with a situation that was perhaps unique for the time. It was really interesting to see that this was as much her journey of self-discovery as it was Lili’s. Both characters pull you into the film for different reasons but both still have a common bond at the centre of it all, and it’s involving.

Something I was impressed and relieved by is that The Danish Girl manages to do something that a lot of films recently have failed to do. This is a film that spans a large period of time and yet I never once felt left out after the film had jumped weeks sometimes months ahead. Somehow director Tom Hooper manages to keep the momentum of the film in line. I also think this is in part helped by Redmayne and Vikander. Both the characters and the actors have a connection, a rhythm to their world and it keeps things together and moving.

So much of The Danish Girl is of course about these fascinating characters. But something that adds greatly to the film is the technical side of it. Director Tom Hooper and Cinematographer Danny Cohen bring a film of continuous visual delight. At times the camera is placed in a way that symmetry themes the scene (Wes Anderson-esque) and it brings a comfortable structure to the film. But also there are times in which it’s almost as if the camera is hidden away in the corner of the scene – as if we are secretly peering into the characters story – not wanting to interrupt or disturb things.

This is a film that also is brimming with stunning scenery. From a small fishing town in Denmark, to the romantic streets of Paris and then all the way to the cloud topped mountains of a beautiful far off place, at first only seen in paintings. Speaking of paintings there are scenes within the fil that rest on proceedings – no movement – very little dialogue – they’re almost paintings themselves these scenes.

Capping it all off is the use of sound in the film. Like I already said, The Danish Girl is an intimate film and so at times we get up close and personal with the characters. This means that a lot of what fills the ear drums are the subtle little sounds of each person. These little moments of detail add to the emotion and almost pull you in closer.

And then of course there’s the music in the film. Never over used, only introduced when absolutely necessary – a delicate little compliment to the scenes that need it, and also a stirring melody when more than just performances are wanted.

The Danish Girl is an engaging film for those willing to allow themselves to open their mind and let something different in. Perhaps not a film that will please most but a film that certainly will garner the attention of award season buzz and those who enjoy a meaningful character film.

I will definitely be recommending The Danish Girl. This is a film that may pass many by because of its overarching subject but is one that is more than it first seems.

What did you think of The Danish Girl or this review of the film? Please feel free to leave a comment down below letting me know. To keep up to date on  the rest of why reviews you can follow me on Twitter – @GavinsTurtle. All that’s left to say is have a great week.

2 thoughts on “Review – The Danish Girl”