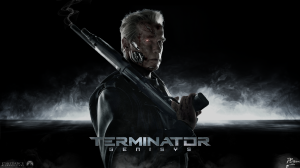 Terminator Genisys, directed by Alan Taylor is a messy, almost unnecessary film that over complicates an already complicated franchise. Despite it introducing some new and interesting ideas, there is a lot about the film that just continues down the unfortunate path, the overall Terminator franchise has taken.

The at times difficult to follow story of Terminator Genisys sees hero Kyle Reese, played by Jai Courtney, being once again sent back in time by his friend John Connor, played by Jason Clarke, to save his mother, Sarah Connor, played by Emilia Clarke, from being killed by the impending Terminator threat, Sound Familiar? This time however, things change as Sarah Connor has been raised and protected by another Terminator, played by Arnold Schwarzenegger, and the two train and wait for said approaching threat, still following? Now Sarah Connor, her Terminator companion and Kyle Reese must save the future and stop Skynet, but that’s not all, as a new, unseen threat rears its head, one that will surely test the will and survivability of our protagonists.

What might be one of Terminator Genisys’s main issues are the poor casting choices for some beloved characters. Starting off with Emilia Clarke who now takes on the difficult task of stepping into the shoes of Sarah Connor, a character who was expertly brought to life by the superior Linda Hamilton, unlike her predecessor, Clarke never reaches the same heights or level of rawness that was previously brought to the role. Perhaps Clarke’s most noticeable struggle with the character is that she never seems to settle on how she wants to play her, one moment being a wise cracking jokester who joins in the fun with her companions, and at the next point trying to be a head strong, no nonsense power house. There is never any consistency within her performance and it leaves the character in a constant state of limbo.

Following alongside her is Jai Courtney who takes on the role of Kyle Reese. Jai Courtney is an actor who doesn’t really ever do anything new or exciting when given the opportunity to star in a film, and Genisys is no different. Giving an unmemorable performance and pretty much just being there as screen filler, Mr Courtney just seems to casually coast his way through the film. He and Emilia Clarke do have some good on screen chemistry; I even at times found some enjoyment from their playful bickering back and forth, but ultimately was left void of any real emotional response from either of them.

Returning for the first time in a while, and not just being some awkward looking CGI creation, is Arnold Schwarzenegger. Without a doubt he is the best part of this film, the role of Terminator is one that Schwarzenegger is perfect for. His ability to deliver one off, witty backhands all while having the same monotone inflections is a joy to behold. For me, seeing Mr Schwarzenegger back in this role was a treat and I thoroughly enjoyed every moment he was doing his Terminator shtick on the big screen. I simply bow to his excellence in anything Terminator based, loved it.

One thing that Terminator Genisys did and it was something that I was at first dubious about, but in the end loved, was the relationship that is constructed around Sarah Connor and her Terminator protector, who by the way she calls “Paps” (I know, I rolled my eyes at first, but it grows on you). I didn’t think this was going to work, but surprisingly it did, and even more surprisingly it was one of my favourite aspects of the entire film. I would happily watch a prequel of these two characters growing with one another, forming that bond, and looking after each other. This is something that almost sold me on the film in the end, it’s a shame that so much else around it, seems to intentionally want ruin it, speaking of which.

Something I didn’t love in Terminator Genisys was the nonsensical story that Genisys poorly weaves. Before this film came out the Terminator franchise was already a muddled mess of a series, now with Genisys, everything is even more confusing and this film takes it to a new, ridiculous level of confusion. Adding in other dimensions, altering things that were already set in stone in other films, throwing in new and unnecessary timeline additions, all just made Genisys a mess of a film, it’s almost like the writers of the film sat at a table and asked themselves, how can we make this even more difficult to follow? That seemed to be their starting off point anyway.

I also quickly need to mention that this film is laden with a crazy amount of exposition. Entire scenes draw to a halt just so they can spout out some expository dialogue, all which is supposed to help clear things up and make it all clear in your mind. It doesn’t, it’s just annoying and as with most exposition, harmful to the pacing and feel of the film.

What Genisys does have spaced well throughout its baffling story, is some fun action sequences. Watching Terminators smash the living hell out of one another, or watching a silly, but fun helicopter chase in downtown LA, all help to break up some of the messier segments of the film, and instil some excitement back into the experience.

The final point I want to make about Terminator Genisys has to do with the marketing for this film. Whoever it was that constructed the marketing plan for this film needs to find a new job. The trailers for this film spoil every single one of the important revelations that it has to offer. I unfortunately saw the trailers for this film before seeing it, because of that, I had pretty much seen all of the most crucial elements in it, and was robbed of the chance to be surprised by anything. It is asinine how this film was shown in previews and whoever was involved in creating and releasing them should be ashamed.

I weirdly didn’t hate Terminator Genisys, did I like the film? No, but I still didn’t mind it as much as I thought I first would. Compared to some other return to franchise films that we’ve seen this year (cough, cough, Jurassic World) Genisys is a masterpiece (can you tell I didn’t like Jurassic World?)

Having said that, I still don’t think I will recommend Terminator Genisys. This is a film that I would say you can wait until it shows up on your preferred streaming service, don’t at any point rush to the cinema to see this film. While it’s an okay film, it is still a destructive film to the overall Terminator franchise, instead, pull out your Blu-Rays for Terminator 1 or 2 and give them a re-watch.