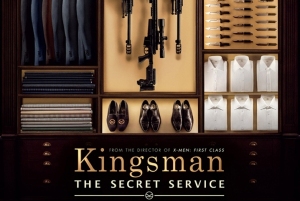 Kingsman: The Secret Service directed Matthew Vaughn is a film with a bit of an identity crisis, in one way the film wants to hark back to the classic spy films, ala Goldfinger and the likes but Kingsman also wants to give these classic spy films an edgier and up to date feel and because of this things quickly get messy and tonally all over the place.

Kingsman is a film that I don’t really get, it at times felt like two different films, jumping from a sleek spy film where our new recruit played by the brilliant Taron Egerton is learning to become the next bespoke, bad guy killing spy of all spies but at the same time Kingsman wants to be this edgy, out of control thrill ride that leaves you shocked at some of the imagery it’s choosing to show you. This ultimately meant that I never really got any real semblance of what Kingsman was, I just ended up shutting my brain off and letting the madness pass me by which is something I don’t really like having to do in films.

What I enjoyed about Kingsman was its characters and subsequently the actors playing them. Taron Egerton who plays the lead in the film ‘Eggsy’ is particularly good. Egerton for being such an unknown/untested actor really takes command of the screen and your attention, he delivers both on the comedy and the more hard hitting stuff and he did it so effortlessly, I never once noticed any missteps from him and by the end of the film had fully invested in his character and the portrayal of him, it’s unfortunately the plot around him that fails to let any real growth or development occur (more on that in a little bit).

On top of an already solid performance from Egerton, Kingsman also has its heavy hitters. Colin Firth as the intriguing Harry Hart is tremendous in this film, everything about his performance was a joy to watch, from his quick wittedness to his to his ability to dispatch a bar of thugs with ease. This was really a different career move for Firth and it was one I very much enjoyed. Samuel L. Jackson brings to the table what your use to, nothing revolutionary but it’s still always good fun to watch him in these types of films, though I could have done without the awkward lisp that seems to come and go. Finally Michael Caine and Mark Strong who both surprisingly to me were the weakest parts of the cast, Mark Strong in particular who delivers an accent that is all over the place and a performance that is shaky at the best of times. All in all director Matthew Vaughn certainly got a great cast of actors together but he seemed to struggle with the characters of some which is a shame.

What ended up being my main issue with Kingsman: The Secret Service was its plot and the structuring of said plot. To boil it down to its main issues, the film was a little slow for me and completely disjointed in its pacing and structure. Now to dive a little deeper into the problems, Kingsman is a film that takes a while to find its footing, the majority of the first act is boringly executed world building. The film soon becomes tedious training montages and scenes of our bad guy doing nefarious and evil things. There were long stretches in Kingsman were I completely checked out and was just waiting for anything of interest to happen and it probably isn’t until the end of the second act that something did. I was continually left wanting more from Kingsman, more development of its main character, a better idea of who the villain was and why he was the way he was. So much of the world Kingsman feels lost to me and by not having anything of real intrigue given to me; Kingsman quickly became a plain, by the books film. Though I will say the action sequence at the end is an enjoyable thrill ride and Vaughn’s action sequences in general were really well shot and it was nice to see a big budget film like this give me some interestingly choreographed fight scenes and fun action sequences, very little to no shaky cam fights in this one which is nice.

When I collect all my thoughts together on Kingsman I can see that there is a good film in there, this film does have its fun moments. Yes the film is all over the place in many aspects but I still think that general audiences would enjoy their time with Kingsman.

That is why I’m going to recommend Kingsman as a film to see. This film is never offensively bad, I think most people will enjoy their time with Kingsman, I would only suggest that you taper your expectations; this isn’t the same calibre of film that we’ve had from director Matthew Vaughn previously.