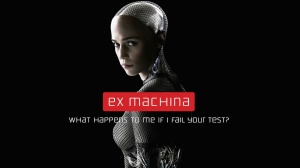 Ex Machina directed by Alex Garland is a film chalk full of suspense and intrigue. Garland expertly crafts a film that constantly leaves you wanting more, more of the science, more of the plot and more of the brilliantly executed characters. Ex Machina continuously kept me on the edge of my seat while never making me want to slip back down into it due to some long, drawn out exposition or tedious side plot, everything is purposeful in the film and I was always entranced by what might be coming next.

Certainly what is one of the most interesting things about Ex Machina is its concept and how director Alex Garland utilises everyday technology that any audience member could recognise and understand and then delve onto the science that is still beyond our reach. Bringing these both together you have a brilliantly well-developed base for the entire plot to stand upon, that being to create a convincing and working A.I.

One aspect in particular that really helped strengthen everything in the film and give it the cohesive, grounded feeling, is its characters and the performances behind them. The definite stand out for me in the film was Oscar Isaac who plays the slightly deluded and eccentric scientist Nathan. Isaac is sublime in Ex Machina, never once faulting in his performance; he really makes this film more than it already is. I was so obsessed with his character that even once the film had ended I was pining for more of it. Isaac brings a chilling, unsettledness to his character, never knowing what his end goal was or even what he might do in the next few seconds made him a character that I just couldn’t stop watching. Oscar Isaac is an actor who I’ve seen many times before but this may be one of my favourite performances of his, he commands every single moment that he is on screen and it is a joy to watch.

As well as the brilliance of Oscar Isaac there is the just as interesting A.I. character Ava played by Alicia Vikander. She like her co-star is brilliant in the film; she instead brings a much different performance than Isaac though. Her quiet but strong moments are great to watch, she commands the screen just like Isaac but in a totally different way, her curiosity and suspicious nature make her one you are never sure of but seeing her growth and how that growth subsequently develops makes for a unforeseen and heart pounding ending. As well as Vikanders performance there is the visual effects that were used to bring the A.I. character to life even more. The effects are flawless, never once did I see a noticeable seem between her and the effects. They brilliantly aid and elevate her performance and they are as incredible to watch the first time you see them as they are the last time you seen them. Had these effects failed or looked noticeably out of place on her the film would have surely suffered, thankfully they just add to the already wonderful looking aesthetic that Garland utilises in the film.

Where Ex Machina suffered slightly for me though was in its main character. Caleb played by Domhnall Gleeson brings a very shaky performance to the film, his noticeably wonky American accent and a performance that doesn’t come anywhere near the levels of his co-stars certainly harms the film. It seemed that director Alex Garland wanted the main character in the film to not be as strong or unique as the others so that the general audience had someone they could easily connect with, a blank slate if you will, one that people can put themselves in and become the main character of the film. I really wish this wasn’t the case. Had Gleeson’s performance been more consistent and much stronger and also had his character been as interesting and compelling to watch as the others, then I think the front end of this film would have been much better, too much of the film relies on Gleeson and for that is certainly suffers.

What I do want to commend director Alex Garland for being able to do is make a high concept sci-fi film come off so effortlessly. Ex Machina almost never gets bogged down in exposition that hampers the flow of the film, so much of Ex Machina is dedicated to its characters and its plot, Garland explores what could easily be a cumbersome and wordy concept by having it all be interpreted and fleshed out in some brilliant back and forth dialogue between its main characters, having two guys sitting around, dissecting the discoveries they are making over a couple of beers brings a level of believability that you just don’t get from most modern sci-fi films these days.

Alex Garland’s first foray into the world of directing has been pretty successful in my eyes. He easily gets across a concept that some audiences would usually struggle with, he gives us some fascinating characters, some of which I would love to see in a film of their own they’re just that compelling and ultimately he gives a world that feels believable. The minimalist look to his world, technology that either already exists or looks like we are on the cusp of having, almost everything Garland did in bringing this film to life worked and I was in love with each and every second of it. I’m certainly looking forward to seeing what Alex Garland does in the future, not only as a writer but now as a director.

I would definitely recommend Ex Machina; this is such an intriguing film to watch, conceptually its fascinating, from its characters/performances it’s a joy and just from the overall feeling it gave me it’s worth it.